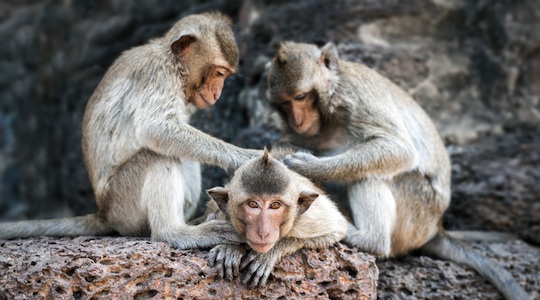 Patrick D’souza explores mirror neurons, and how they can be used by brands to influence consumer behaviour.

It was in the early 1990s that a team of Italian researchers led by Giacomo Rizzollati first discovered the presence of a set of neurons in monkeys that ‘aped’ each other, or fired simultaneously. Basically, when monkey A behaved in a certain manner, monkey B followed suit – also adopting the behaviours exhibited by monkey A.

While this was interesting from an academic perspective, the real breakthrough came two years later when ‘mirror neurons’ were found in human beings!

In other words, what people see, they will soon, unconsciously enact – unless aware of their behaviour at a very high cognitive level.

Mirror neurons can be used to influence the behaviour of consumers

Mirror neurons do not stop working as we leave childhood. They are fundamentally what allow us to continue to learn even as adults by observing, imaging and imprinting the behaviours of others in our own minds.

This is probably why contemporary psychology now believes that only 25% of behaviour is based on personality (genetic psychology), while  the other 75% is based on environment and the behaviour inherent within it.

It is consistent with psychologist Albert Bandura’s theory of Reciprocal Triadic Determinism which suggests that personality, behaviour and environment are deeply interlinked.

What these studies reinforce is the real factor within the environment that is driving behaviour – mirror neurons in the very people who exhibit them.

Leveraging mirror neurons in marketing is easy, not hard

At its most basic level, playing out desired behaviours in video, whether delivered in television, web or mobile formats, will, over time, result in the identical behaviours being imaged, imprinted and played out by the audience, and mostly by them, unconsciously.

In 2013, Facebook undertook an unauthorised (and I would say, brilliant) experiment on its user base covering 689,000 users.

What it did, was ‘alter its algorithm’ temporarily. Using sentiment analysis, it upped the number of negative posts in one group of users and upped the level of positive posts in the other group being tested.

Very soon, the behaviour of both groups changed. The group that was exposed to negative sentiment also became increasingly negative in mood, while the group exposed to positive sentiment became even more positive after the exposure.

Not at all. The great David Ogilvy, who I remain an absolute fan and disciple off (despite my feeling that his agency is losing their grip on his ethos and principles a bit), stated quite clearly in Ogilvy On Advertising and Confessions of an Adman that what works in television is ‘visual demonstrations’ and ‘slice of life’. In both theatrical enactments, the idea is to show behaviour to get the audience to ‘ape’ it.

This simple principle works, and in any format, be it analogue or digital, television, web or mobile.

Today video is where the action is

Mobile is leading the way even here. Adnews reported, earlier this year, that from 2012 to 2014, video consumption on mobile and tablet has grown by 532% and two-thirds of video views on Facebook are happening on mobile.

Mirror neurons can be used most powerfully in video. When used wisely, and responsibly, they can enable behaviours through demonstration and other more creative techniques in a way that benefits both brands and the consumers they serve.

BY ON 11 February 2016
Patrick D’souza is a part-time student of Applied Psychology at the Australian College of Psychology (ACAP), Sydney, Australia. He holds an MBA (High-distinction) from the AGSM (Australian Graduate School of management), UNSW as well as Bachelor in Accounting. He works in marketing for one of Australia’s top private equity, debt and capital management firms. You can connect with him on Twitter @patrickbdsouza1