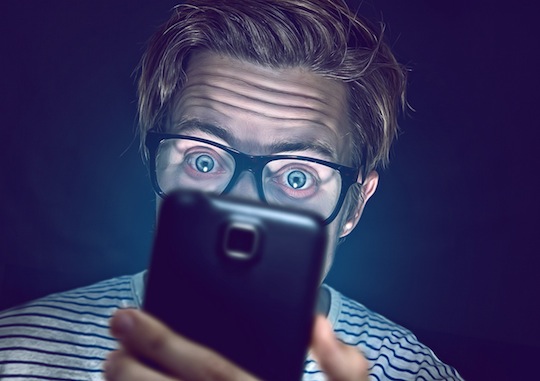 Smartphone attachment has become an ever-present facet of life in Australian life. Sérgio Brodsky explores the ritualistic and compulsive behaviours that make it look very much like addiction.

Just a few months ago, in a Chinese subway, a woman had a hysterical attack because her smartphone’s battery had died. Her crying and screaming, almost laughable, could, in fact be a reflection of the dark side that mobile technology might be dragging us to.

If you ever felt an irrational fear of not having your smartphone near you, or developed an eagerness to check emails or your newsfeed in the middle of the night and might be experiencing ritualistic morning-afternoon-evening eye-burns, welcome to the club… you may suffer from ‘nomophobia’.

According to a 2008 survey of 2163 adults in the UK underwritten by the Royal Mail, which coined the term, it is supposedly “the fear of being out of mobile phone contact,” (i.e., a no mobile phobia).

Four years later, another survey by security company, SecurEnvoy found that young people aged 18 to 24 are the most nomophobic (77%), while those in the 25 to 34 age group are second at 68%. In terms of gender, more women than men (70% versus 61%) reported being afraid of losing cell phones, while men are more likely than women (47% versus 36%) to have two cell phones.

Some signs of nomophobia are:

I probably tick three of the above four points plus a few others, like a discomfort of not having my phone surgically placed in my pocket like a hip-joint. There’s also that haunting anxiety when, from the distance, I hear it reacting to an email, tweet or anything else… similar to the feeling of hearing your child crying and having to run to the rescue.

I’m not the only ifreak, however. According to a 2012 survey from mobile app company TeleNav, 40% of people with iPhones said they’d rather give up brushing their teeth for a week than go without their phone. Thankfully, not my case.

From a device standpoint, interaction designers purposefully develop products and interfaces with an ability to create and establish habits with their users, where the more addicted one gets the more successful the product becomes.

The book Hooked: How to Build Habit-Forming Products, by Nir Eyal, provides a four-step behavioural methodology, the Hook Model, explaining how products can reach their ultimate goal of bringing users back again and again without depending on advertising or aggressive messaging.

Tinder’s swiping, Facebook’s scrolling or dragging shapes and colours in a game have similar psychological effects to the many ways a person holds and playfully handles a cigarette or a glass of whiskey. Of course tobacco and alcohol also have chemical factors contributing to addiction but physical gestures very closely associated with specific actions also contribute to getting us hooked to the stuff we interact with.

In the digital context it then becomes easy to suppress reason in favour of action-enhanced emotions, making it really hard to outsmart developers and ‘come out of the screen’.

With that in mind, the cute tone of voice used by Telstra on its recent ‘Why Aussies Love Their Smartphones’ report could’ve somewhat been interpreted as inappropriate when saying: “82% of smartphone users say that they are never without their device – we love that kind of devotion,” and, “Maybe you were a smartphone in a past life”?

Psychologist Richard Balding of the University of Worcester in the UK would probably disapprove of the telco’s light-heartedness when dealing with such a serious issue. In 2013 he conducted a study that concluded that continued use of cell phones does increase stress levels, which likewise generates growth in compulsive behaviours such as constantly seeking new alerts, messages and updates.

Although the scientific community has been divided about using the term ‘phobia’ in the context of this condition, in 2014 a proposal was put forward for including nomophobia in the Diagnostic and Statistical Manual of Mental Disorders (DSM) – the gold-standard manual for assessing mental disorders.

While there are no certified nomophobia practitioners, the nomophobia survey findings were so concerning that the UK’s Royal Mail created a nomophobia memory guide with all sorts of helpful ways to improve your memory so as to not lose your phone.

Website Nomophobia.com went a step further in an attempt to normalise and help deal with the issue by enabling ‘addicts’ to share their stories on personalised ‘nomo diaries’, simulating risk-free no-mobile fear situations (eg. stolen, stranded, damaged and lost) and encouraging people to take a test and ‘self-diagnose’ themselves.

Do you think you are addicted to your cell phone? Would you be comfortable going a day, a week, or a month without one? (Don’t worry, no judgement. I recently had to buy a special set of blue-light cancelling lens and glasses due to visual fatigue from excessive screen exposure. The burnings have decreased. Not so sure about the addiction though.)

If you want to put yourself through a nomotherapy experiment below is a quiz designed by the Iowa State University that can help diagnose how nomophobic you are.

BY ON 5 November 2015
Sérgio Brodsky (L.LM, MBA) is an internationally experienced brand strategist, a marketing lecturer at RMIT and chairman at The Marketing Academy Alumni.
He is passionate about cities and culture and the role of brands and technology in society, an intersection from where he drew inspiration to conceive a radically innovative approach to brand communications, he coined Urban Brand-Utility.
Connect with Sérgio on www.sergio-brodsky.com or through his Twitter handle @brandKzarglobal brand strategy and innovation. Follow him on Twitter: brandKzar.