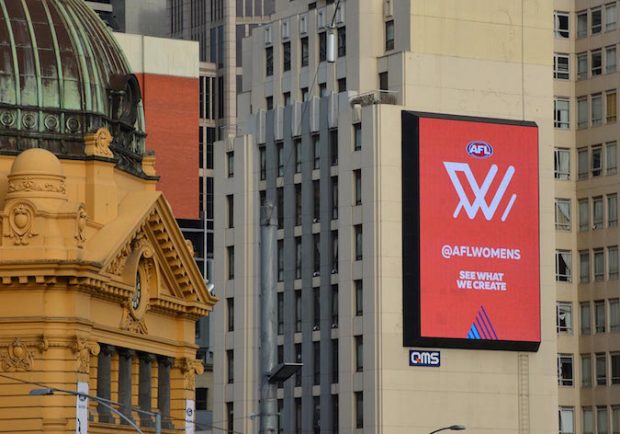 The AFL has unveiled its brand mark for AFL Women’s.

The AFL has today unveiled its ‘W’ brand mark, developed by Push collective, for the AFL Women’s league.

The design explores the shapes of goal posts and a goal square to construct the ‘W’ icon.

“We wanted to create something that was bold, future-forward and modern, but resonated strongly with the players and fans of AFL Women’s”, says Jemma Wong, AFL marketing manager.

“It also needed to be designed for digital environments and small screens as well as carrying weight in traditional media,” she says.

“The launch of AFL Women’s is a milestone in Australia’s sporting history. Our team was determined to create a brand identity that expressed a new perspective on the game and its traditions,” says Ken Shadbolt, executive creative director, Push Collective.

“We are thrilled to be a part of creating new history for the players and fans who are driving AFL Women’s and helping to inspire future generations who no longer have to wonder whether it’s possible for women to play a the elite level,” he says.

In line with the AFL Women’s brand position ‘See What We Create’ – which empowers players to take an active role in the development and future of the league – players, clubs, the Football Advisory Group worked closely with Push and the league to create a design which was powerful and inspirational.

The brand mark is on display today near Flinders Street Station in Melbourne’s CBD on digital billboard sites in celebration of the launch.

The logo was revealed in a video featuring many of the league’s star players and will feature prominently in the lead-up to next year’s comp and be supported by a new visual brand identity.

For the latest in opinion and case studies on Australian brands and campaigns, purchase a subscription to Marketing magazine