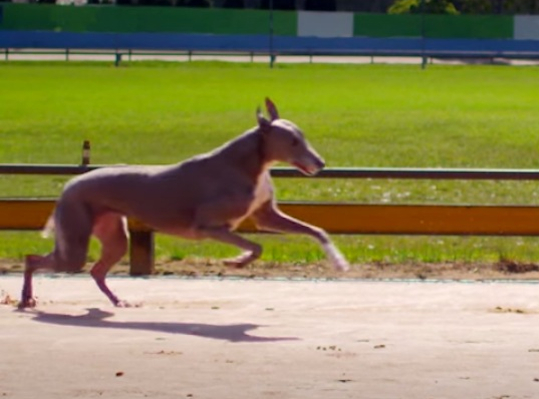 Sportsbet and Audi have plugged into the buzz around the Fifty Shades of Grey movie, opening in Australia tomorrow, by producing their own branded parodies.

It’s an almost word-for-word parody of the official Universal trailer, replacing the sensuous Mr Grey with, yep, you guessed it, a greyhound named Tilly.

“Sportsbet is giving doggy style a whole new meaning in a production that will leave you hot under the collar,” says sportsbet.com.au’s Will Byrne.

The video was released on Sportsbet’s YouTube channel just three days ago and has already racked up more than 61,000 views.

But not everybody has responded well to the brand’s attempt to align itself with the notoriously raunchy storyline.

Comments on YouTube have ranged from, “I think it’s brave and funny – but very strange” to, “This is really messed up guys. Not in a funny way either,” and “That’s disgusting! Beastiality implications much???”

You’ll have to see it for yourself:

Beyer makes suggestive comments to a range of people she rides the elevator with, referencing the film’s focus on kinky adult toys.

The YouTube comments on this one are far less hostile, but of course, the Audi brand’s reputation and target market are vastly different from Sportsbet’s.

« Virgin and Tourism Australia target Oscars to lure American touristsIkea Emoticons: ‘A smart solution to end misunderstandings around the house’ »