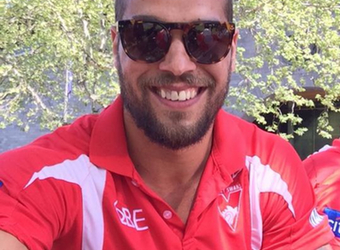 In the social media stakes, Hawthorn is just edging out its Sydney opponents ahead of the AFL Grand Final on Saturday, according to the Adobe Digital Index, but the polarising Hawk-turned-Swan Buddy Franklin leads the player buzz.

In the 30 days leading up the Grand Final, fans from around the globe are taking to the internet to show their support. The buzz generated by the two teams leading up to tomorrow’s clash at the MCG has taken place across blogs, Facebook, Google Plus, Reddit, Twitter, Dailymotion, Flickr, Instagram, Tumblr, VK, Disqus, Foursquare, Metacafe, WordPress, and YouTube.

In the number of mentions, the Hawks may have already won the psychological social media battle, but only marginally. Fan reactions have ranged from joy their team had made it to the biggest game of the year, to surprise they had done so. 14% of Hawthorn’s social media mentions expressed surprise the defending champions had made it to the Grand Final again, while just 7% of Swans mentions were surprised.

Chris Skelton, Managing Director of Adobe Australia and New Zealand, says passion for Aussie Rules had spilled over into the ongoing inter-city rivalry between Melbourne and Sydney: “The match-up between Sydney and Hawthorn has really fired up the fans and the Hawks seem to have found an edge with their followers across social media, but clearly there is not much in it as Swans fans have also been out in force supporting their team and their city.”

The Adobe Digital Index tracked both teams as they made their way through the finals series, capturing the number of mentions of ‘AFL Grand Final’ and the sentiment people were expressing.

Former Hawthorn player Buddy Franklin, who will be wearing the opposite colours this year, proved not only to be the most mentioned player on social media, but also the most polarising.

Franklin’s Twitter following of more than 280,000 fans resulted in him getting more than two-and-a-half times more mentions than the most mentioned Hawthorn player, the Hawks co-captain Luke Hodge. But while Franklin managed to garner plenty of attention, 46% of mentions related to sadness or surprise about his appearance in the big match against his former team, while 54% related to joy or admiration.

“The AFL may not be a global sport in terms of participation, but this figure clearly shows it has a huge following beyond Australian shores,” Skelton says. “To be only marginally behind the NFL in terms of support outside the country where the sport is played is an amazing result.”

Some 81% of all mentions came from Australia, with 6% from the UK, 5% from the US and 3% from Germany, reflecting the global appeal that the AFL has managed to generate.