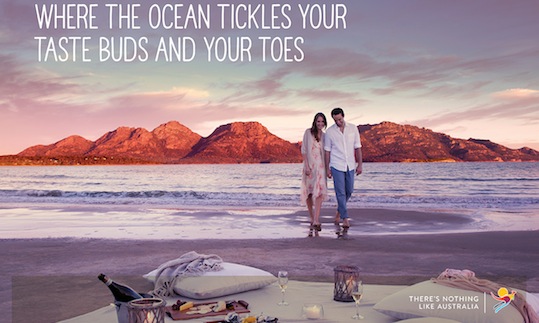 Focussing on Australia’s famous coastal landmarks, such as the Great Ocean Road, Sydney Harbour and Port Lincoln, the ‘there’s nothing like Australia’ campaign aims to entice visitors to come to Australia to experience and feel everything Australia has to offer, from wildlife, to cuisine, indigenous culture, boating, snorkelling, hiking, surfing and more.

Creative for the campaign, developed by Clemenger BBDO and production agency Finch, was bolstered with the addition of 360 degree videos created in partnership with Vrse.works, the international virtual reality and 360 degree content creators.

Tourism Australia will spend $40 million rolling out the campaign over the next six months, starting with the US in a joint campaign with Virgin Australia airlines, followed by other key international markets including China, the UK, Japan, Singapore and New Zealand.

“Australia has always had the advantage of being a highly desirable destination. The challenge is how to create a sense of urgency to visit that counters those perceived barriers such as time, distance and costs,” says Ronson.

The decision to continue pushing Australia’s coastal and inland aquatic landmarks and activities was an obvious one for Tourism Australia managing director John O’Sullivan, who says “already 70% of our international visitors an aquatic or coastal as part of their trip, so this is a campaign we know will resonate strongly across all our key markets.”

360 degree video experiences include a helicopter ride over the 12 Apostles, swimming in Sydney Harbour, sailing near Rottnest Island and snorkelling in the Great Barrier Reef.

Tourism Australia’s recently revamped website australia.com will add another platform for the campaign.

And a 360 degree underwater video from Port Lincoln, South Australia