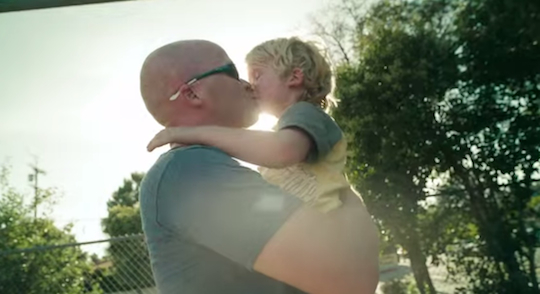 Unilever skincare brand Dove has turned its social mission to focus on men, with a new campaign aiming to combat stereotypes and question what it means to be a “real man”.

The brand that has made itself famous for challenging notions of beauty in women with its ‘Real Beauty’ campaign, and stereotypes for girls with last year’s ‘Like a Girl’ campaign, is now turning its sights to men.

The local execution of the global campaign for its ‘Dove Men+ Care’ range of body products centres around a podcast series partnering with transformative events group The Wakeup Project.

This first episode features Australian rugby union Wallabies coach and former player Michael Cheika, talking with The Wakeup Project founder Jono Fisher about “being gentle” and what it means to be a “real man”.

“On a day-to-day basis I’m asking chaps to knock lumps out of each other, you know, and it’s pretty aggressive – rugby’s a game of intimidation – so you’re always on the edge there, to going home and then being gentle.

“Just yesterday we went out training and it was very physical, I was quite loud at training and giving a lot of instructions, and it just happened the kids were on holidays so my wife decided to bring the kids to training.

“So as I’m walking off the field, transitioning out of that head I’ve got to go straight into the attitude that I would have looking out for my kids, in front of all the players, too, obviously, which I think the guys really like. It’s almost like you could be wielding an axe one minute and pushing a pram the next. They see that you’ve got the belief that both things are okay to do.”

The 45-minute interview is available in video through YouTube and in audio format via SoundCloud.

Each week Dove will release a new episode, with upcoming guests to include former CEO of National Australia Bank Cameron Clyne, and TV presenter and journalist David Koch.

“In the same way that Dove Women has started a global conversation around real beauty, we want to start a conversation about a man’s true strength. The Dove Men+Care ‘Real Strength’ campaign aims to celebrate the caring character of today’s man, recognizing how care for himself and others makes him stronger.”

“While it’s great to hear men respect others who show vulnerability, most men still feel uncomfortable showing vulnerability themselves. These conversations are about giving men permission to be more emotionally honest in their family lives, workplaces and in society at large.”

From the US, this extended content piece focuses on John, a serviceman who has been away from his young family for seven months. Dove plays the hero and reunites him with his family on-camera.

Dove commissioned masculinity author and researcher Dr Michael Kimmel to undertake a survey that found some real changes in the way men today perceive masculinity compared to their fathers’ generation.

McCarthy says these statistics show a new idea of ‘real strength’ is emerging in Australia.

“The research shows that men believe masculinity today is measured beyond traditional notions of power, affluence and physical strength, yet the overwhelming majority think the way masculinity is depicted in the media doesn’t reflect this shift.”

BY ON 5 May 2015
Assistant editor, Marketing Magazine.