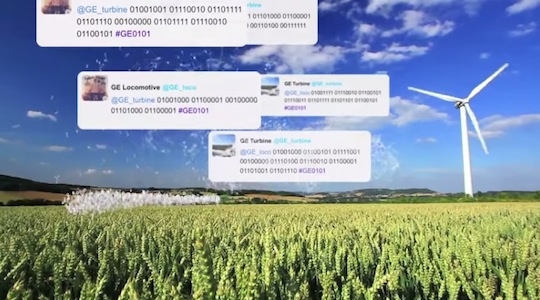 Aiming to position itself at the forefront of industrial innovation, GE recently set up ‘tweeting machines’ that talked to each other in binary code, challenging Australians to crack the code to win a trip to the company’s conference in San Francisco.

Over three weeks ad 234 hours, GE’s ‘tweeting machines’ sent amusing messages to each other, from a love story between a locomotive engine and a wind turbine, to a light bulb having an emotional crisis.

“For the competition element we wanted to challenge the coding community in a way never done before. We utilised visual cryptography techniques to hide an Easter egg image digitally in the images that featured in our machines conversations.

‘In order to decrypt the image and piece it back together the participant needed to write their own algorithm to strip out the hidden code and reassemble to reveal the Easter egg image and a secret URL to visit. First person to find the secret URL wins.”

More than 40,000 people engaged with the campaign and hundreds tried to crack the code until Andrew Radion, a recent graduate, civil engineer and hydraulic modeller at GHD, succeeded.

Dubbed Australia’s best coder for unlocking the ‘tweeting machines’ challenge, Radion will fly to San Francisco for the GE Minds and Machines Conference.

“This campaign helped position GE at the forefront of what will define innovation for the next 50 years – the Industrial Internet.

“Its novel approach and testing challenge showed that machines are ‘talking’ all around us, and behind every machine sits software equally impressive – software that connects, minds, machines and data.”