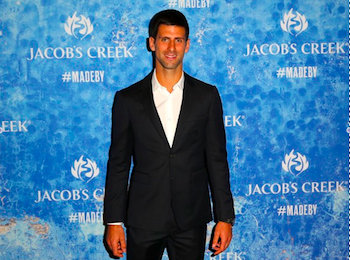 In a documentary-style series created by Cummins and Partners, Djokovic shows the world a an ‘unseen’ side of himself. The unscripted series features stories about Djokovic’s childhood living in Belgrade, Serbia.

‘Made By Determination’, filmed in July 2014, takes viewers to the beginning of Djokovic’s journey, from the hardships of growing up in a country torn by war, to the commitment and passion of his first coach Jelena Gencic, to winning his first Grand Slam.

The ‘Made By’ film series forms part of the new Jacob’s Creek ‘Made By’ global campaign which agency Cummins and Partners says celebrates the people, places and passions that go into crafting every bottle of Jacob’s Creek wine.

“Everything I experienced growing up has led me to become the person I am today. Creating the Jacob’s Creek ‘Made By’ film series has allowed me to tell my story, in my own words and share it with the world”, says Djokovic.

“Novak’s story is powerful, and the determination, dedication and effort he has put into his career is similar to the craft of our winemakers and the people behind Jacob’s Creek”, says Oliver.

Djokovic’s work with Jacob’s Creek is part of the company’s global tennis sponsorship platform, which includes the Australian Open, Wimbledon and the China Open. The global launch has rolled out across 16 markets in broadcast, digital social and retail.

The full series of films can be viewed at the campaign site madebyjacobscreek.com.