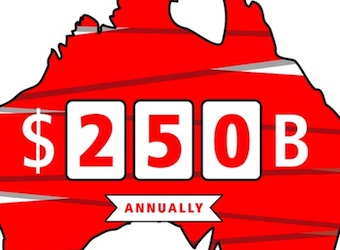 Deloitte is waging a war against self-imposed red tape, which it says is costing the country $250 billion a year and draining productivity in all sectors.

The issue is uncovered in detail in the ‘Get out of your own way: unleashing productivity’ report and accompanying website, including the below infographic. Not-for-profits and NGOs are spending more than six hours a week dealing with self-imposed red tape, the report says.

The report states the ‘real annual cost of rules’ as including:

Report co-author, Deloitte Access Economics’ Chris Richardson says Australia has created a ‘compliance sector’ that employs more people than construction, manufacturing or education. “Where rules don’t exist, we create them. Where they already do, we make more. They overlap, they contradict, they eat our time and they weigh us down.”

Richardson says organisations in both the public and private sectors should reassess their approaches to managing risk.

“Taking a long, hard look at the rules that individual organisations operate within will reduce the cost and complexity of doing business in Australia.”

« Chartered Institute of Marketing rebrands with a new identity and ‘hackathon’ to solve marketing’s problemsBrands get spooky for Halloween: ‘Dumb Ways to Die’, Cadbury and Ikea »