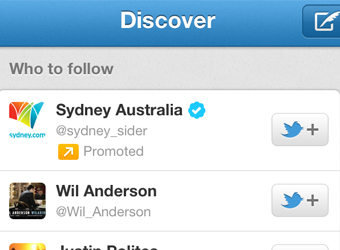 Previously advertisers could only send blanket messages to followers regardless of their location, making it impossible to target specific locations or take geographic sensitivities into account. Tweets targeted at users located in Sydney would show up to users in Melbourne for example, as well as users located throughout the world.

The announcement is likely to see more advertisers begin to experiment with Promoted Tweets for the first time now that making relevant, local offers is possible.

Twitter also announced that mobile app providers who only want to reach customers on one device can do so without sending the message to desktop users as well.

“Advertisers can compose targeted Tweets using the newly enhanced Tweet box in ads.twitter.com. As with all Promoted Tweets, advertisers only pay when users engage with it, and Tweets that generate the most engagement are likely to appear more often. Simply put, advertisers are rewarded for messages that resonate with audiences,” Twitter said.

The feature, which is now available to all advertisers globally who use Promoted Tweets, has been in beta testing for several weeks and Twitter has been working with a group of existing advertisers including @British_Airways, @CocaCola, and The Washington Post (@wpsocialreader), according to The Wall.