Gen Y is separating into two tribes when it comes to online engagement with the younger cohort less engaged with the internet than their older peers.

The collective Gen Y group comprised of nearly five million active internet users in August, or 31% of the online population. On average they spent 86 hours online during the month, but when divided into the two groups the older segment was far more active, logging 101 hours online compared to 65 for the younger cohort.

This is driven by two factors, Bruce says, with younger people heavier users of short and sharp sessions on mobile devices while the older segment are more likely to be working in an office environment and have a reliance on the internet and email for business activities.

As a whole, Gen Y are among the biggest users of the mobile web, making up 44% of users in the latest one week period measure by Nielsen’s Online Ratings in August. 71% of the group own a smartphone and 56% access the mobile web on a weekly basis. Browsing the web, emailing and making video calls were among the most popular uses of mobile data within the group.

Little change was recorded in the most visited websites for August, with Google maintaining its place as the most visited, closely followed by Facebook, which continues to dominate for time on site. Gen Y’s favourite website brands closely mirrors that of the total online population. 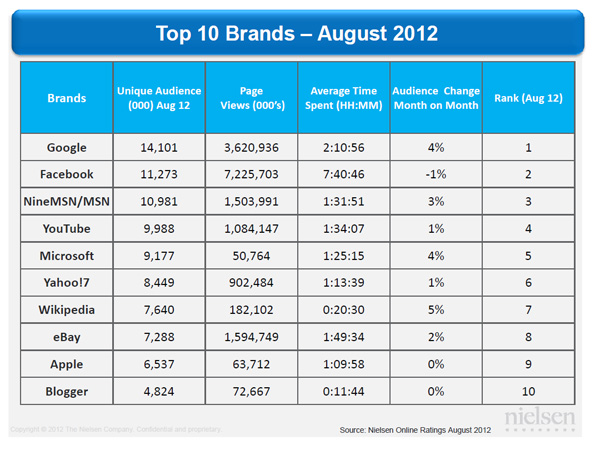