Australia’s Commonwealth Bank, ANZ and Westpac have achieved double-digit growth in brand value in the past year, according to the 2014 BrandZ Most Valuable Global Brand rankings, which also sees Google overtake Apple to become the world’s most valuable global brand.

According to the report, which is commissioned each year by advertising services group WPP and conducted by Millward Brown Optimor, Google is now worth $159 billion as a brand, an increase of 40% year on year.

Apple’s three-year dominance of the list comes to an end in 2014, with the tech giant slipping down to the number two position on the back of a 20% decline in brand value, to $148 billion. While Apple remains a top performing brand, there is a growing perception that it is no longer redefining technology for consumers, reflected by a lack of dramatic new product launches. The world’s leading B2B brand, IBM, held onto its number three position with a brand value of $108 billion.

“The impressive growth in brand value of the Australian brands in this year’s Top 100 is in line with the strong recovery in valuations seen across the globe,” says Johnny Panagiotidis, senior business consultant at Millward Brown Australia. “The global financial crisis was a challenging time for many companies but despite fluctuating macro-economic conditions and the impact of digital disruption, we still see 71 of the brands listed in our 2014 Top 100 that were there in 2008. Strong brands are better able to weather the storm and, when valued by companies, create value for them.”

BrandZ Top 100 Most Valuable Global Brands study, commissioned by WPP and conducted by Millward Brown Optimor, is now in its ninth year, and bills itself as the only ranking that uses the views of potential and current buyers of a brand, alongside financial data, to calculate brand value.

The combined value of the Top 100 has nearly doubled since the first ranking was produced in 2006. The Top 100 today are worth $2.9 trillion, an increase of 49% compared with the 2008 valuation, which marked the start of the banking and currency crisis. 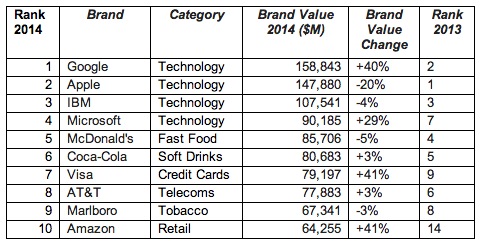 This year’s research report included the identification of some key trends that play an important role in brand value.

Share of life: Successful brands such as Google, Facebook, Twitter, Tencent and LinkedIn are more than just tools, they have become part of our lives. They offer new forms of communication that absorb people’s attention and imagination, while also helping them organise the rest of their lives at the same time. To gain more of our mind-space, brands such as Tencent and Google are even crossing categories. This trend also pushed No 1 Apparel brand Nike, a prime example of a brand seeking to become a share of life brand which offers services such as Nike+ that extend well beyond its functional raison d’etre.

Purpose beyond profit: Brands in business for reasons beyond the bottom line have a better chance of success in today’s world. For example, Pampers, which promotes mother and baby health issues, is at number 39 in the ranking and grew its value by 10% to $22.6 billion. Dove, which has continued to find huge success on the back of its ‘real women’ philosophy, has a brand value of $4.8 billion.

Apparel fastest growing category: The top 10 apparel brands grew in value by 29% to nearly $100 billion this year, outpacing cars (up 17%) and retail (up 16%). With brands such as Uniqlo, Nike and Adidas all recording double-digit increases in their valuation.

Technology service companies continue to climb: Not only are the top four brands technology companies, but so too are many of this year’s biggest risers. This year’s fastest climber was leading Chinese internet brand Tencent, up 97% to $54 billion and the number 14 position, followed by Facebook which rose 68% to $36 billion and took the No 21 spot. New brands in the Top 100 include Twitter at No 71 with a brand value of $14 billion and LinkedIn at No 78 worth $12 billion. Collectively, Technology companies make up 29% of the value of the BrandZ Top 100 ranking.

High value brands provide faster growth: An analysis of the BrandZ™ rankings as a ‘stock portfolio’ over the last nine years shows a highly favourable performance compared to a wider stock market index, the S&P500. While the value of the companies in the S&P500 index grew by 44.7%, the BrandZ™ portfolio grew by 81.1%, proving that companies with strong brands are able to deliver better value to their shareholders. A graphic is available here.

Brands from the Western World bounced back in 2014, with a greater proportion of both the number and value of brands within the top 100. This reflected the resilience of established brands and the breakthrough of new brands, as well as improved economic conditions. As a result, the number of brands from fast growing economies slipped in 2014.China, with 11 brands, continues to have the largest representation, two Russian brands, Sberbank and MTS, remain in the ranking, and mobile operator MTN  is Africa’s representative for the third consecutive year. 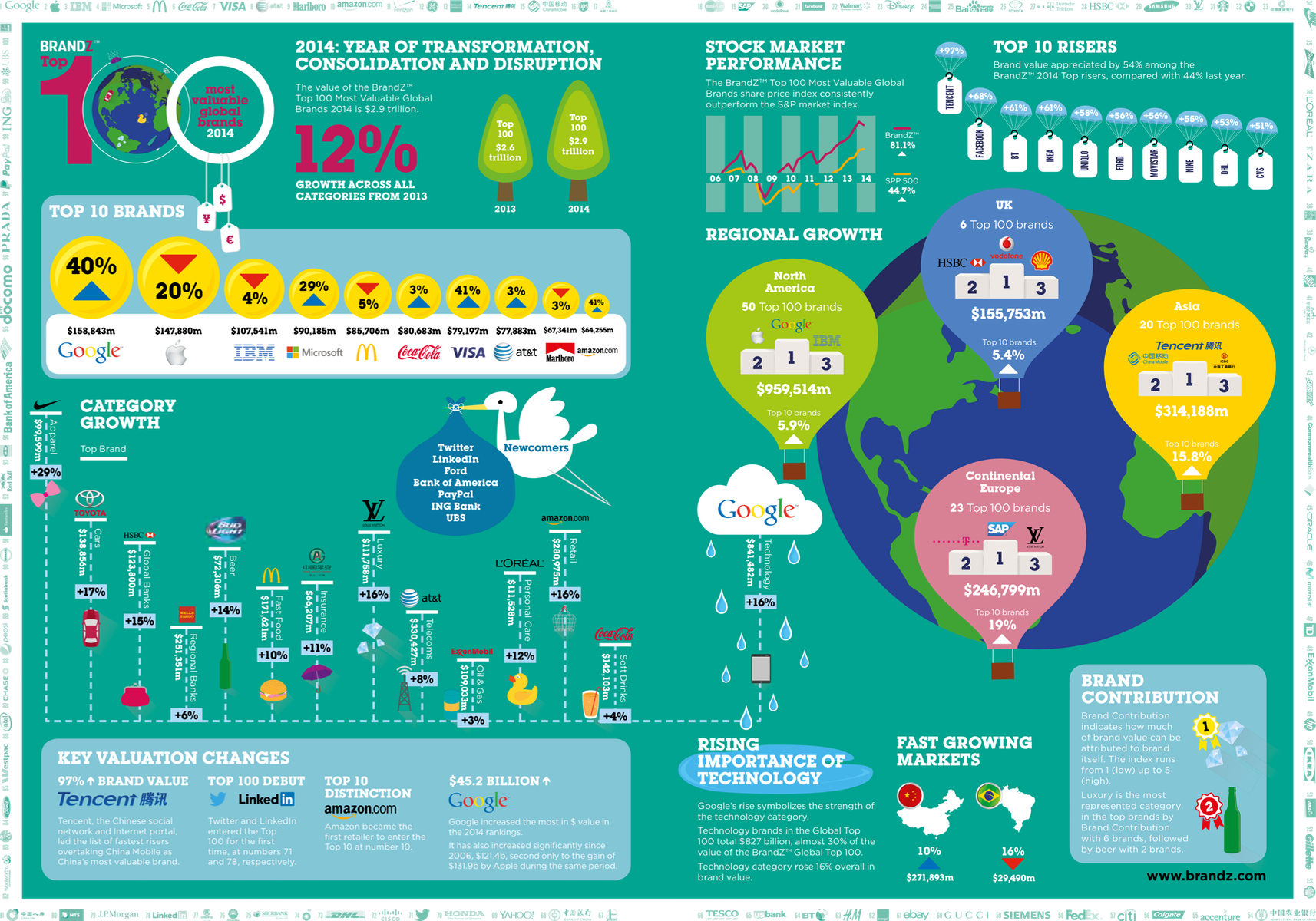