Is Facebook Stories dead in the water? And what’s with those grey photos?

Is Facebook Stories dead in the water? And what’s with those grey photos? 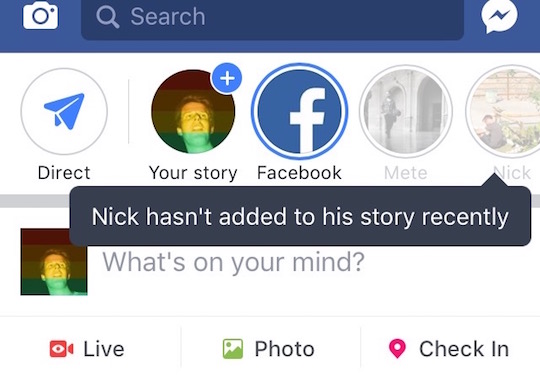 Facebook’s new Stories function has garnered criticism for copying Snapchat and doesn’t seem to be engaging many users.

Facebook launched its new story feature in its app last week, adding a feed of pictures at the top of user message boards reminiscent of Snapchat or Instagram Stories.

This week, it has started using greyed-out photos of user’s friends, seemingly because this is better than leaving a blank space because no-one is actually posting stories.

Tapping on a greyed-out profile pic will deliver the prompt that your friend ‘hasn’t added to his/her story recently’. The author of this article suspects many of those friends may never have added to their stories.

Many on social media were quick to accuse Facebook of blatantly ripping off Snapchat Stories as it tries to keep up with the platform.

It’s not the first time. In December, Facebook Messenger introduced a series of familiar capabilities that enabled art, 3D masks and effects to photos.

Then there’s the fact that the Facebook-owned Instagram Stories – which has been more successful for the company – also appears to be a blatant rip-off of Snapchat.