Rio Tinto, Google, Microsoft and Qantas are among the most attractive Australian employer brands, according to a study from LinkedIn.

The professional social network today revealed the results of its ‘InDemand Employer’, finding Rio Tinto was the most attractive and sought after Australian employer on LinkedIn based on the level of interest users of the social network showed in the company online. 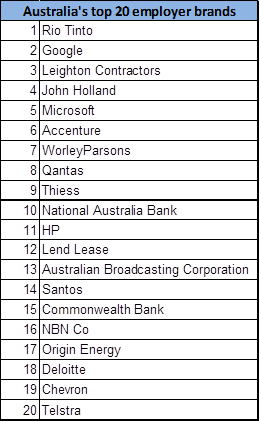 Two banks made the list – National Australia Bank at number 10 and the Commonwealth Bank at number 15. Iconic Australian brand Qantas rated a mention at number eight, despite last year’s industrial disputes. The ABC was the only media company to make the top 20, at number 13.

“70% of companies rank employer branding as one of their biggest priorities as they increasingly compete for top talent,” says senior director of LinkedIn’s talent solutions, Steve Barham. “The ability to better understand how your company is perceived among key professional audiences empowers you to take steps to better engage the professionals you most want to hire.”

InDemand Employers is powered by LinkedIn’s Talent Brand Index tool, a new, free service that allows companies to measure and benchmark the strength of their employer brand. LinkedIn offers the following three tips for boosting one’s rating on the talent index: