Many within the industry would like their practice acknowledged as a science, however according to Alex Kirk, marketers must first remedy a fundamental lack in understanding of the role of data. 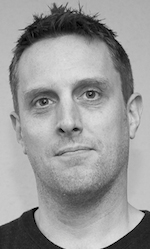 The debate still rages as to whether marketing is a science or not, but regardless of your views it’s clear that there is at least a broad, growing effort to become more ‘scientific’ in the approach to marketing. However, a critical pillar of science is, obviously, data – and yet while everyone talks about data, almost nobody is fully considering its implications for how we work.

As marketing and advertising tries to transform itself into a science, there seems to be a pervasive sense that merely knowing and adhering to laws or principles of marketing are all that an agency or an advertiser needs to do to keep up. Where that theory crashes into reality is that operationalising that knowledge is an equally significant challenge, and hardly anyone seems to want to talk about that very much.

This is because most advertising and marketing folk are like labradors – fun, adorable, pleasant types, who enjoy madly chasing things that catch their eye, and like nothing more than pleasing other people. Like labradors though, most of us also require the presence of a functioning adult to keep us fed, and to prevent us from running straight under the nearest bus. I say this with love.

Science, though, is the opposite thing. Rigorous, process driven, hard to distract and utterly contemptuous of lesser pursuits like making money or doing anything with practical value.

‘Marketing science’ therefore requires the smashing together of a truly unlikely pairing.

At the core of this is the fact that science relies on and creates data – and that alone means fundamental changes will be needed to how a previously non-scientific organisation works.

If you want to become data driven, evidence based or use a scientific method (and I bet at least half of the agency heads out there have used those phrases at least twice this year), then every process, every task and every workflow in your organisation will have to change.

They will need to at least be re-examined, and at most reimagined completely or redesigned from the ground up in order to accommodate this new flood of information.

Data is often described as ‘the new oil’, but for me, that’s far too simplistic, focusing only on a value proposition. A more nuanced view is to regard data as water – it’s bloody useful if you’re in a desert, but you can also drown in the stuff.

It can both help and hurt because data creates waves, its effects rippling through an organisation, with often unintended results. A positive effect in one part of the business can cause chaos elsewhere as its effects strengthen.

We see these effects in some of the most famous stories in business history. Blockbuster knew that video streaming was coming, but – fatally – it kept its core assumptions and business operations intact.

In particular, it was convinced that people would still visit its retail stores to collect streaming video rental codes. As mad as that sounds now, it didn’t recognise that a new approach, and the new data that would be created, was simply incompatible with its existing operating model.

That failure, of course, allowed Netflix, unencumbered by such legacy thinking and able to create the new kind of operational innovation needed from scratch, to create a whole new market for itself. Essentially, data rippled through Netflix and fuelled it – but it hit Blockbuster squarely in the face and crushed it flat.

Blockbuster failed to change how it worked and paid the price.

So, as marketing changes to include a more scientific approach, the operating rhythms of the marketers and agencies who work within that discipline must also change. Just swapping around ingredients in the product is not enough – as agencies and businesses transform, how we work becomes just as important as the work we do. Are you ready for that?

Alex Kirk is head of system and automation at MediaCom