How an in-store lab is changing innovation mindsets at Woolworths

How an in-store lab is changing innovation mindsets at Woolworths 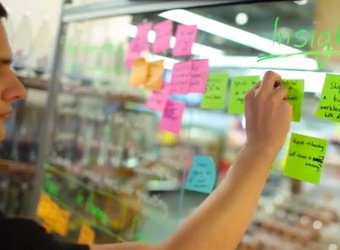 An in-store agile innovation exercise conducted by Woolworths not only unearthed some neat technological solutions to improve the shopping experience, it taught a 90-year-old retailer a new, efficient innovation methodology, and went some way towards embedding a business mindset comfortable with constructive failure.

Woolworths is approaching in-store innovation a bit differently these days. The supermarket giant recently conducted an exercise in which it set up an innovation lab in one of its stores, where it was free to test technological solutions to issues and improvements to processes in a real shopping environment.

The exercise lasted about one week, during which the team was able to test dozens of ideas, some of which hadn’t been thought up prior to commencing. The result was not only some promising ideas that could be rolled out more widely, but also the ability to very quickly weed out ideas that might have sounded good on paper but didn’t work.

While it will take a bit more than an isolated agile innovation exercise to completely undo traditional business processes, a 90-year-old retailer has learned new methodology for innovation and went some way towards moulding a mindset that is able to tolerate uncertainty and constructive failure.

The agile innovation project saw a section of one Woolworths supermarket turned into a testing ground, where technology solutions and improvements to shopping experiences were imagined, tested and either ditched or improved on quickly.

Marketing spoke with Woolworth’s Wayne Ryan, business support manager, and Lee Venaruzzo, agile program manager, after their presentation at a ThoughtWorks event, about how Woolworths set up an in-store innovation lab.

Watch the case study video on Woolworths’ agile innovation project, then read our interview with Ryan and Venaruzzo below.

Marketing: ‘Failure’ is a scary word for business, but in this context it’s about identifying the wrong paths, which is itself progress. Is that a big mentality switch? Are there processes that businesses traditionally have in place that need to be avoided or broken down for this type of innovation project to take place?

Wayne Ryan: One thing we didn’t touch on heavily in the speech is I’m not advocating for you to go and take a hundred million dollars and just throw it away. We don’t want people to do that. What we want to do is around that mentality piece – get people to think differently about how you approach these problems. Be a bit faster in how you think about it, so be prepared to go out and take a bit of a risk, see what the results are and then react to it immediately.

Lee Venaruzzo: There’s a general view around really driving improvement and continually improving. It’s not about how we change this process to that process, it’s about deciding, as we try to do things, we find out some processes are getting in the way, so let’s attack that a little bit then change that. It’s not necessarily that we’re going to change overnight, it’s more a case of plugging away and as we see things getting in the way, roadblocks, we knock that one down then we come up against the next one and then away we go.

M: It’s interesting you say the best thing to come out of this exercise was not the results of the experiment but the experiment itself and the methodology. Was that the goal at the start?

WR: I’ll be honest, as a businessperson, yeah, we knew all about agile and this methodology, but here’s an opportunity to put something in front of customers. I’m a technology addict, I believe this is the right thing to do, here’s a perfect opportunity for me to try it. That was the goal. It wasn’t until the second or third day we started realising we could do this across a number of different ideas we’ve got. So that’s where it became more about the process.

M: And how do you recommend other businesses to go about that? What’s a good level to start at?

LV: I think it’s similar to where we first started, even before this, which was really about how do we do something fairly small. There’s something we already know we’re going to do so we don’t need to convince people that we should be doing it. What we’re trying to change is the way we do it. If we have a way of proving that something does or doesn’t work and it’s based in science or fact, that’s different to us sitting around the table and wondering if we think it is a good idea.

Once you get that real feedback from customers it’s harder to say ‘I still think this is a good idea’, when I’ve now got evidence that it may not be. It changes the level of discussion.

If someone else was going to start it, I would say, pick something that’s already going ahead, and make it successful, or make it not successful, fast, using these methods.

WR: Value the results regardless of whether it’s a success or a failure. And learn from those results, basically, is what we did. Take a small project, take a small team if you don’t have a project, and change it.

Then demonstrate to the rest of your business and talk about it. Be open and up front, do presentations and team meetings, or literally just talk to your colleagues and go, ‘We’re doing it this way and we’re seeing great results’. That’s really what’s going on internally for us. And more and more people go, ‘Well, what is this?’

I said before, no one goes to work in the morning wanting to do a bad job. Sometimes they just need to be shown a different way or a bit of advice. So do that. Show them how to do it. If you need help, there’s a number of companies who are doing this. Ask someone. Use your contacts in the industry. If you need advice to start, I’d encourage you to start.

LV: One of the things I found interesting out of approaching it in this way is you start off and you think you’re alone in a corner chipping away, and then you put your hand up and you notice 50,000 other people also put their hands up and say ‘We’re in for this’. You realise very quickly you’re not in isolation and there’s a lot of people trying these things.

WR: The biggest block I found when talking to people wasn’t, ‘Oh this is the way to do it’ or ‘We control stuff like this in the stores’. It was, ‘What happens if we fail?’ That’s what we’ve got to crack. Have an agreement that if you fail, it’s not the end of the world, you’re fine, it’s okay, learn from it and move on.

M: You make a good point that the usual process is very expensive anyway.

WR: Absolutely it is. You get to a point with a project where failure just wont happen, you just get to that point where you go, we’re too long down the time, we’ve committed too many resources, we’ve got too much capital tied up in this. You have those conversations – ‘How do we make this work?’ Throw more time, people, whatever it is, we will make this work. That ‘it can’t fail’ sort of mentality ends up costing you.

LV: It’s almost that sunken cost fallacy, if you’ve already spent that much, you can’t afford not to keep going.

M: So as well as a great way to weed out failures early, what happens when there’s a success? What’s the next step?

LV: So the next step for us is really about going, how do we go and learn from that experiment. So the sort of tests we did there were with a very small subset of customers.  So if we were going to push that idea forward, you’d go, ‘How do I increase the scope of it?’

Whether that is through more recipes or more base items throughout the store, whether that’s across more stores, would be the way. So we wouldn’t actually go to everywhere. We’d look to validate that experiment further.

WR: You’ve got to be honest, when you do it this fast – I mean, those lights were put together with masking tape – you refine it, you make it neater, more like it’s supposed to be there in your next evolution.

LV: And the goal here is not about building something scalable. It’s about not ‘Can I build it’ but, ‘Should I build it?’

WR: You can build anything. Anything can be done. That’s not the point. It’s should you?