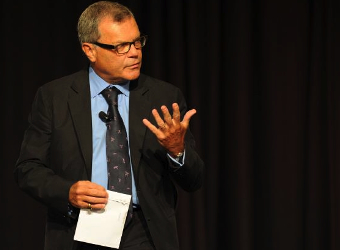 Speaking at The Growth Faculty’s Global Leadership Series in Sydney, Sir Martin Sorrell elaborated on the opportunities of ‘fast-growing’ markets as the corporate gaze shifts from West to East. In his first ever official presentation on Australian soil he spoke trends, digital, the economy and WPP’s strategy, and also sat down for a one on one with Marketing.

1. The shift in the balance of power from the West to the East

We are basically betting the ranch, and I shouldn’t say that as the CEO of a listed company with a market cap of $17 billion, but we are betting the ranch on that strategy of new markets, new media, consumer insight data, application of technology and horizontality. Everything comes down to technology and geography at the end of the day – everything that you think about, every problem you have, every opportunity you have, comes down to those two issues. But geography is probably the most critical. It’s the geo-manual shift in the balance of power from West to East, that you know about far better in Australia, I would argue, than we in the West. There is still a failure to understand that shift in America, the UK, in France, in Germany, in Italy and Spain.

I urge you to go back and look… China’s and India’s GNP (gross national product) as a proportion of worldwide GNP in the early 19th century was 50%. In 1819 or 1820, when Myson and Wedgwood were trying to attack the Chinese porcelain industry, they were producing porcelain of the same quality… at a lower price. Precisely the reverse of what we see going on now. China and India were 40 or 50% of the worldwide GNP. That is where they will be again, according to Goldman Sachs and others, probably by 2025, 2030. This is back to the future; we’ve been here before 200 years ago.

2. Significant overcapacity in every industry

Everybody thinks that the automobile industry has shrunk since Lehman in 2008 – the big three in Detroit have cut capacity in the US, for example – think again. What’s happened is that the Chinese, the Indians, the South Koreans… Hyundai (the Samsung of the car industry in my view) has started to build capacity to match the decline in the US. In most industries, we see similar situations. Overcapacity is still the issue. So what we do in our industry is of critical importance.

It disintermediates them with a lower-cost business model, and institutional investors and venture capitalists and private equity companies tend to look at them differently to legacy companies. They always look at volume and hits, or the equivalent of circulation, not of profit margins. People like to work in smaller companies, less bureaucratic companies, technologically-advanced companies. So looping back to that talent question or point, technology companies, web-based companies, are much more attractive in terms of attracting people, particularly out of universities and design schools and art schools and film schools.

4. The power of retail

I don’t have to tell you in Australia the power of retail. Tesco, Carrefour, Walmart are all putting pressure on manufacturers around the world because of their strength at the retail level, and also because of some of the challenges that each of those companies is going through at the moment. That’s putting tremendous pressure on the manufacturers. And when you look at the last 20 years, you go back to 1990, there’s been very little price inflation at the consumer level. So our manufacturing clients have very little pricing power with consumers, and you’ve had an increase in commodity prices, at least until recently, which has put internal pressures on their margins.

We’re trying to organise ourselves globally, as I mentioned, but also locally. It’s no good multinationals believing that they can sit in London or Paris or New York or Washington and run relatively complex organisations from the centre: there has to be this balance between global and local. The squeeze inside corporate organisations I think will come at the regional level, and you will have global and local organisations much more.

The biggest challenge facing chairmen and CEOs is explaining internally what they’re doing, strategically and structural.

7. We’re not as important an industry as we were several years ago

Finance and procurement has become, inside corporations, much more powerful than marketing, and that’s a mistake. Obviously I’m biased, but go back to that differentiation point – the need in an overcapacity world to differentiate themselves. You can’t cut your way to success, or, put another way, there is a finite period that you can cut costs, but you can’t go on cutting forever. We have to get our clients thinking about expanding the top line and understanding the importance of strategic thinking, the importance of big ideas and creativity, particularly in an environment that is changing from a media point of view so much.

8. Government is here to stay

Those of you who think the government is going to recede, think again. Despite what may happen after the US election in terms of dealing with the US deficit, government is going to be with us as a client, as a regulator, as an intervener for a substantial period of time. The only historical precedent that you could find I think for what we’re going through post-Lehman is the 1930s, and it took World War II really to change the balance of government intervention.

Five, 10 years ago, if I was trying to make this speech, certainly there would be a lot of ‘greenwashing’ going on. [But today], if I look at our biggest clients, corporate social responsibility is front and centre of their strategy. And if I quote what John Brown, the former CEO of BP, said in 1999 at Stanford Business School, ‘doing good is good business’.

Tags:
Previous Article
Facebook launches new global brand pages structure
Next Article
Where to next for the marketing profession? 3 observations