During the soccer World Cup last year, U.S. midfielder Ale Bedoya sent all his teammates a bottle of Johnnie Walker Blue Label engraved with the words: “Brazil was just the beginning. Keep Walking”. Bedoya told the press he wanted to do something to commemorate the occasion, because win or lose, making it to the World Cup, especially to the Round of 16, was “an epic achievement”.

This anecdote was told by Syl Saller at last week’s AANA’s Reset conference in Sydney. The frank-speaking Saller is the London-based, Boston native, CMO of Diageo globally, covering 400 brands across 180 countries. She oversees all global marketing, design, innovation, R&D and reserve and has worked on the iconic Johnnie Walker brand since 1999 when ‘Keep Walking’ was first launched.

Saller says the most powerful way you can disrupt marketing is to “change yourself” as a leader. She echoed the idea of the Reset conference, saying marketers can aim to reset their management not only every year, but every month, to “take it up a notch”.

Wanting to dispel the myth that you “have to be brave” to succeed in business, she revealed that she had a lot of fear at every major turning point in her career. Saller said she was dragged “kicking and screaming” into most of her senior management roles, but ultimately realised that it never turned out to be as scary as she had imagined. 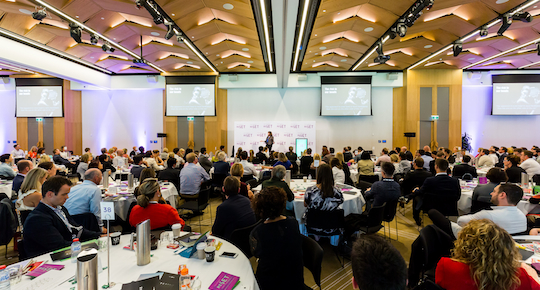 In 1999, Saller accepted a job in London that she had initially turned down. She reconsidered after being encouraged by her husband that he thought they should move the family to London because he “liked pubs” and their kids were “too sheltered.”

The children were less than enthused. Saller says her 11-year-old daughter cried for five days and didn’t forgive her for two and a half years, and her five-year-old son took his cue from his sister and hid under his bed for five hours.

Six weeks after moving to the UK, the company was sold and Saller was out of a job. Having only one business contact in the UK, Saller said she was very lucky that he worked at Diageo. She was eventually offered two jobs – one running marketing for Burger King or a job marketing Diageo’s spirits brands in the UK. She took the spirits job, as she was beginning to learn that: “The bigger the challenge the greater the learning.”

Speaking about the original Johnnie Walker ‘Keep Walking’ campaign, Saller said the idea was that people “walked to progress”. And this applied to people all over the world, from all walks of life.

Saller said in Turkey recently, the Diageo marketing people had risen to the challenge of marketing the company’s brands in a remarkable fashion, where it is now illegal to advertise alcohol.

She said the team has delivered consistent growth, even though the government banned all consumer communication about alcohol. The list includes: no communication, no branding, no logo, no sampling, no price discounting, no product displays, no internet advertising and no sales after 10pm.

“But our team in Turkey is amazingly creative and what they do is entirely legal”. Crucial to Diageo’s business is sampling, but alcohol sampling is not allowed on Turkish soil. But technically the British Chamber of Commerce and the British Embassy is not Turkish soil, so they conduct sampling programs there.

“These regulations came down overnight, the market went ‘dark’ but our people didn’t complain. They saw it as an opportunity to have a competitive advantage and out-market the competition with these restrictions”.

Saller says she really values people who can step back and look at what is going to grow the entire business. She thinks it’s incredibly important. And to do that you need to collaborate – across organisations, globally, with business partners and with agencies.

Referring to the thinking behind the new campaign that’s about to break for Johnnie Walker, Saller said: “Since launching ‘Keep Walking’ in 1999, the world has changed a lot. And so we conducted an in depth study on how people define progress today; particularly the attitudes of millennials. Millennials are the most diverse and the most educated group in history.”

“Research led to a compelling cultural insight, and that is a constant push for what’s coming next.

“Those who find joy in the journey are the ones that will progress further. We want Johnnie Walker customers all over the world to be happy.

“A positive outlook is actually a competitive advantage. There is a lot of research that supports this. It’s not just that happiness makes us feel better; it actually helps us perform better. Happy people are more successful than those who aren’t – being both more productive and more creative. One study quantified this by saying happy people are 30% more productive and three times more creative,” Saller said.

“So happiness equals success. The conventional view that if we work hard we will be successful and we will be happy is actually backwards. Happiness builds success, it’s not the other way around.

“This insight was the starting point for the development of our campaign. It was time for Johnnie Walker to flip the formula. Hard work works. But joy works harder. And this shapes how we’re going to take Johnnie Walker into the future and hopefully leapfrog the category,” said Saller.

The new platform is: “Joy will take you further. Keep walking.”