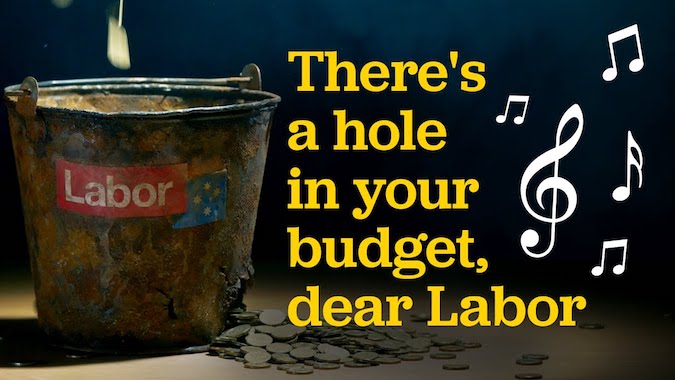 The federal election has been called, and we have a new Prime Minister in charge. Not only is it an exciting time of change, but we can also collectively breathe a sigh of relief that the campaigning is over.

On Saturday 22 May, 2022, Anthony Albanese became Australia’s thirty-first Prime Minister. The Labor leader secured his position in wake of an aggressive campaign period.

In the last election Clive Palmer’s United Australia Party campaigning became infamous. Hitting us on all platforms from YouTube to billboards and even texts. The communication was relentless and not a success as Palmer scored a total of zero seats.

But the Coalition did something even more memorable this time. The Liberal’s released a jingle that stayed with you, for better or worse.

There’s a hole in your budget

On every podcast, on every radio station, in every ad break, came the jingle. “There’s a hole in your budget, dear Labor, dear Labor…” sang the female voice to the tune of There’s a Hole In My Bucket.

It annoyed everyone. It sparked memes and outraged Tweets. The repetitiveness of the song took precedence over the message. Someone, somewhere, from the depths of their room, made a club remix of the now infamous campaign song.

But it did what a jingle needs to do. It had made a footprint. And, regardless of where our vote was going, the song was staying.

This sparked the age-old question, “do jingles work?”

Effective jingles aren’t made to be played by choice. Jingles are made to be remembered. From Lube Mobile: 13 30 32 to Reading Writing Hotline: One, three double-O, six triple-five, o-six.

So, jingles work. The repetition gets stuck in our minds, rolling around in them as we try and shake it off with a song of choice.

But, the Coalition’s jingle isn’t as innocent as a Chicken Tonight or Bird’s Eye Fish Fingers. It was an attempted smear campaign on the opposition leader. It basically, without nuance, called out the flaws in Labor’s budget.

However, all political campaigning is the very basics, set out to convince those less informed to vote one way.

This time the annoying jingle didn’t work. And, as Albanese serves his first week as the Prime Minister of Australia, one of the biggest blessings is that all media channels can now safely be turned on without the fear of hearing what will go down in history as one of the most annoying campaign spots.

Previous Article
QLD Youngbloods kicks off an exciting calendar year with ‘Night of the Round Tables’
Next Article
SEO trends for 2022: How to get on top of Google search