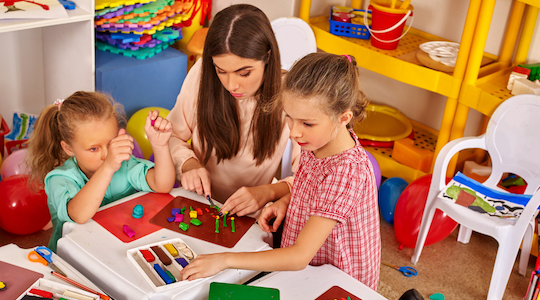 Rob Morrison says we should consider the four great motivators: fear, guilt, greed and ego when focussing on innovation.

It wasn’t exactly front-page news but our agency did an office re-arrange recently. Going open plan. Breakout spaces. A small refit. One of the unexpected outcomes is now, outside my window, is a childcare centre. Little four-year-old boys and girls spend several hours a day learning to socialise. It’s the best reality show ever.

Now child number two is wailing like a, well, like a whale quite frankly. A skilled (and impossibly patient) early childhood carer then negotiates with both. Makes child one apologise. Takes the toy away from both, and finally, finds a second, identical toy.

At this point both children now want both.

Predictably, two minutes later both toys, once so in demand, are abandoned as they discover the brightly coloured chalkboard. The script restarts.

It struck me what I’d just witnessed is a petri dish of adulthood.

So much of our behaviour is hard-wired into us. One of my copywriting heroes, Herschell Gordon-Lewis, insists there are four great motivators – fear, guilt, greed and ego. I’d just seen them all in four minutes.

Crucially, as marketers, we use precisely the same ‘hot buttons’.

Related: Alex Allwood on open innovation and why it’s important to expand your horizons »

We make toys feel expensive – playing to the ego of our inner child. Premium brands use this technique all the time. “It’s not for everyone, but it is for you.”

We show those who have no toys – loading our inner child with guilt. Fundraising brands almost always use this technique. ‘Look at everything you have, when these people have so little.’

We show what happens when the toy is taken away – pricking our inner child’s fear. Insurance brands are terrific users of fear. ‘Imagine what would happen to your family if you were not around.’

And, most often of all, we tease our audience with a second toy – and our natural greedy inner child wants both. Retail brands love to play in this space. ‘Buy one, get one free.’

And in our new, digitally disruptive world, these motivators are even more relevant.

Think about it. Which motivator does your latest innovation appeal to? Fear, guilt, greed or ego? You’ll notice ‘cool’ isn’t an option. That’s deliberate.

Sustainable success demands every toy appeals to something more fundamental. Otherwise they’re too easy to cast aside. So your toy needs to be more Barbie than Cabbage-Patch. More iPhone than iWatch. More Facebook than MySpace.

And you can tell the difference early on.

To illustrate, there’s a lovely story in Steve Jobs’ biography. Michael Noer, a journalist for Forbes magazine, wrote to Jobs about an amazing experience he had with his new iPad. Noer was at a remote dairy farm near Bogota, Colombia when approached by a curious six-year-old. The boy was fascinated by the device. Not only had this child never seen a piece of iTech, but he was also illiterate.

Within minutes the boy was happily using apps, switching from game to game, eyes wide open, enthralled. And, much like the kids outside my window, didn’t want to give it back.

Not because it was cool – the child had no point of reference for that. Because, once exposed to the humanised technology, he greedily wanted to keep exploring.

So, when in doubt, as we all are at the moment with digital disruption, ask yourself ‘what would a four-year-old do?’ Appeal to the hard wiring of the inner child and you can’t go wrong.

For the latest in insight and opinions on marketing innovation, purchase a subscription to Marketing magazine

BY ON 5 August 2016
Rob Morrison is acting ECD at Ogilvy Brisbane.

« Expand your horizons: why innovation must come from external sourcesHow storytelling can relieve the goldfish factor »