The smartphone as a retail navigation device [infographic]

The smartphone as a retail navigation device [infographic] 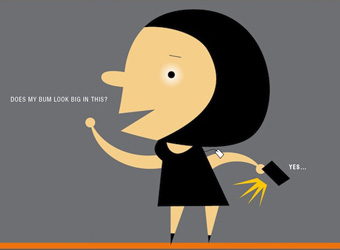 Smartphones: they can help you navigate foreign cities, local eateries, real estate and even the field of nearby singles waiting to beat down your door. They can also help you navigate the retail landscape, a fact retailers are becoming increasingly wary of. Marketing presents, and explains, its original infographic on how the smartphone is increasingly being used as a personal shopping assistant below.

As of February this year, one in three smartphone owners had used their device in-store to aid the shopping process, according to TNS’ ‘Joining the Dots’ study, a figure that’s likely to have jumped since. The savvy shoppers who use their phone as a secondary shopping channel while they browse the aisles bounce back and forth between bricks- and-mortar and online merchants, sniffing out the best products and the best deals. They seek the best of both worlds, walking the showroom for a tactile experience with products or the instant gratification of buying on the spot, and checking their phone for price comparisons, independent reviews or more detailed information.

Some categories lend themselves to the online world better than others, due in part to their nature and in part to the degree to which the category has travelled online. Electronics stands out as the most common category shopped in unison, with 79% having accessed their phone as a secondary information channel while in-store. The practice can easily lure shoppers away – 34% state they would buy online if they found something 10% cheaper, a figure that jumps to 64% if the price is 20% cheaper.

For retailers, this looms as a potential loss of control. The trend has been described as one of the factors contributing to the dwindling fortunes of American retailer Best Buy, as consumers take advantage of their well-stocked showrooms and knowledgeable staff to research products they intend to buy elsewhere. But TNS researcher, Peter Firth, says it can also be an opportunity for the retail sector. “It’s about maintaining the purchase,” Firth says. “While people are in your store, you have some control over what they purchase. If you can facilitate the purchase while the shopper’s there by offering some reward, some incentive, all the information they need or access to consumer reviews, it cuts down the risk of shoppers going home to look online or buying from elsewhere.”

For higher involvement categories in particular, the mobile is in fact a catalyst for purchase behaviour, a factor that can lose a sale but an opportunity that can be seized to keep a sale also. The mobile can be used as a tool for the retailer to connect the dots between what the consumer appreciates about bricks-and-mortar stores and what they crave from the online world. In the research, which looked specifically at this trend, shoppers were asked about the last purchase they made in-store with the assistance of a mobile device. Taking the high involvement electronics category as an example, 71% of shoppers state they wouldn’t have bought the product they did or would have visited other stores if they hadn’t had their phone on them to check their options. This means for those who are accustomed to using the phone, almost three in four purchases would have gone begging, demonstrating just how important it’s become in their decision making process.

The mobile web emerged as the most commonly accessed point of secondary research, with the website of the retailer currently being shopped and price comparison sites the most popular destinations. Apps show lower use currently, but high future demand, with 45% rating them as an ideal shopping assistant tool and 43% rating apps with barcode scanners as desirable.

As part of TNS’ study, five shopping related mobile services were tested with consumers, including a shopper rewards app, billboard grocery shopping, recipe suggestions and an ideas and inspiration stimulator. The rewards app, defined as a service that rewarded shoppers with points redeemable for discounts, emerged as the most popular option. It’s a proposition already in action in the US, where Shopkick has proven popular with shoppers.

Other uses of the phone in-store which proved popular among consumers were using it to get real-time advice from friends. Two retailers recently employed strategies encouraging this behaviour, gaining them social media buzz in the process – Diesel who installed webcams outside change rooms for shoppers could post pictures of outfits to Facebook and receive real time feedback and Sportsgirl who installed a digital mirror in a Melbourne store.

Short of investing in an innovative mobile solution, there are a number of commonly voiced tips for retailers to put into practice. Many are widely known, but not so widely implemented, such as ensuring your website is optimised for mobile. Optimisation of your store in mobile directories, such as Google Places, is also important, so that people searching by current location can find you. Incorporating social elements into your mobile content, like Facebook Connect, and ensuring the content is shareable can help to further spread word of your offer via mobile. And if you’ve got information online or offers to direct shoppers’ attention to, cross promote them in-store and encourage interaction via the mobile device so that your destination is the one they end up at, not a competitor’s.

However popular online retailing may become – it accounted for 5% of retail sales in 2011 according to the NAB’s Online Retail Index, compared to 7.5% in the US and almost 10% in the UK – the real world store still fills many needs. It will retain its place as a vital link in the retail chain, and possibly even be aided by the smartphone’s ability to join the dots between the real and virtual worlds.

BY ON 24 May 2012
Chris Byrne used to be research editor of this publication, but now contributes from various locations. He also contributes to The Fetch and has been published in The Guardian, Sydney Morning Herald and The Age.
Tweet him @penseive

« Tell me something that matters to meWhen the going gets tough, what sort of marketing should you really be doing? »