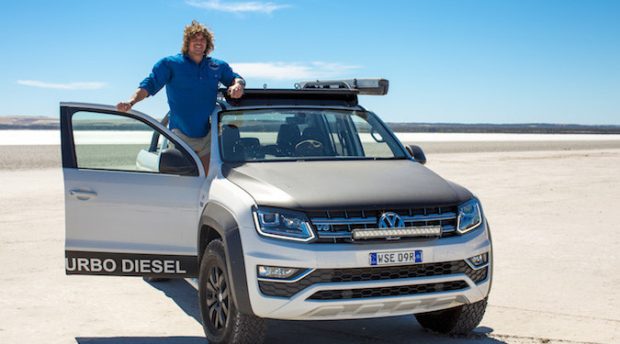 The ‘Extended Test Drive’ campaign launched in October 2017, offering customers a 72-hour (500 km limit) test drive for the 4×4 vehicles on the Amarok line. A series of five TVCs starred Cummins as he took the Amarok V6 out of the city and into the bush. Similarly, Cummins’ latest offering ‘Meanwhile in Australia’ follows him around the Southern coast of Australia in an Amarok v6 Turbo-diesel, as he searches for the people and places that make Australia unique.

“Volkswagen Commercial Vehicles is excited to partner with Nick and feel that his adventurous lifestyle and love for the Australian outback is a perfect fit to the Amarok brand,” says Volkswagen Australia’s commercial marketing manager, Nick Reid.

According to Cummins’ agency Lampoon, the partnership with Volkswagen will see him feature in a line of ongoing social, digital and retail television campaigns for the Amarok.

The Volkswagen partnership was procured through Cummins’ long-time commercial manager and CEO of brand entertainment agency Lampoon Group, Josh White, who says “we take a very strategic approach to Nick’s brand relationships and this is one we have been building out with Volkswagen for the last 18 months.”

This Volkswagen deal adds to a growing portfolio of Cummins’ post-sport celebrity career, with previous relationships with Tradie Underwear, GoPro, Head and Shoulders, Meat and Livestock Australia and The Iconic. Additionally, Cummins has released two autobiographies, Tales of the Honey Badger and Adventures of the Honey Badger.