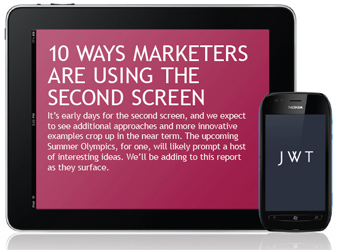 The ‘second screen’ is quickly becoming a golden marketing opportunity, as consumers increasingly multi-task while watching TV with their smartphone or tablet. Using it to complement the TV experience is becoming increasingly common as live events or telecasts engage their audiences in ‘social TV’ and advertisers attempt to capitalise on a ‘media multiplier’ effect in real time by referring viewers from TVC to the device in their hands.

This profileration of screens is creating intriguing new possibilities for TV broadcasters and marketers alike, JWTIntelligence writes in this top 10 taken from the agency’s trend briefing. JWT’s report was compiled from research conducted throughout the first half of the year, and supplemented by interviews with experts from Shazam, TVexchanger.com, MIT and Participant Television.

Big annual events like the Super Bowl and the Grammys have been garnering more viewers and buzz as social media and second screens create a digital watercooler. Brands are catching the attention of viewers whose attention is split between screens in various ways.

Coca-Cola created commercials featuring its animated polar bears for this year’s Super Bowl, then extended the idea into a second screen ‘Polar Bowl’: Two bear viewers (one rooting for the Giants, another for the Patriots) reacted to the game, the halftime show and the commercials in near-real time. The bears also commented via @CocaCola on Twitter. While the brand had planned for 300,000 concurrent live stream viewers, more than double that number had the stream open by the third quarter, with viewership growing as more people mentioned the Polar Bowl on Facebook and Twitter.

Mobile apps open up opportunities to reward TV viewers for watching commercials or second-screen branded messaging – incentives range from freebies and coupons to relevant content like recipes – and even lead them right into an opportunity to purchase.

Another way to incentivise viewers to not only keep watching ads but more actively engage with them is by adding second-screen gaming elements that are either fun for their own sake or tied into contests and sweepstakes.

In 2011, Coca-Cola created Chok, an app for the Hong Kong market that turned users’ phones into a mechanism for collecting virtual bottle caps. When signaled by the music in a Coca-Cola TV commercial, the app opened and synced to the ad, then prompted consumers to shake the phone (‘chok’ is Cantonese for this action). Using the device’s accelerometer, the app measured the vigor of the motion and doled out bottle caps accordingly. These could be used to enter an instant drawing for prizes big and small, including digital goods like mobile games. Within 15 hours of launch, Chok became the number one free app.

Instead of simply asking interested or intrigued viewers to visit a microsite or Facebook page after seeing a TV commercial, marketers can use second-screen apps like Shazam to quickly link consumers with a campaign’s online elements and provide simple ways to share their enthusiasm via social media.

A 2011 Australian campaign for this Unilever ice cream brand was themed around the Enigma bear mascot helping consumers to “reveal their soft side”; the microsite let Australians send a personalized message via the bear to ‘someone special’. Shazaming the TV spot led viewers directly to a mobile version of that site.

Simultaneous watching and shopping, with instant gratification for consumers and measurable results for brands, is an old idea that never quite came to fruition beyond home shopping networks. New technology looks to be changing that. While the second screen isn’t vital here, mobile apps offer an easy route to purchase. This could be through a TV spot that syncs to e-commerce options on mobile devices or by using the second screen to surface info on how to buy in-show products.

Watch With eBay, the US app lets users ‘shop your favorite shows’. You input your zip code and cable provider to set it up, then enter the channel number in order to see live auctions linked to what’s on-screen. In theory, the app brings up products related to the TV content: a basketball jersey during March Madness, a Jessica Simpson brand T-shirt during the show Fashion Star. In practice, however, it turns up just as many unrelated items (Ringer, for example, summoned a bounty of ringer T-shirts; Fox’s Bones turned up unaffiliated Bones brand skateboard wheels). eBay ultimately aims to match up its listings with specific items viewers are seeing (or lookalikes) by accessing a product database that various shows would provide. A secondary feature, ‘Shop Like a Star’, allows app users to choose from among an actor’s favorite eBay categories, with purchases benefiting the celeb’s favorite charity.

By either partnering with existing tools like Shazam or piggy-backing off custom TV show apps, brands can sponsor novel second-screen experiences for fans.

The US version of The X Factor, which airs on Fox, added a synchronised Xtra Factor mobile app last September that’s ‘presented by’ Verizon. Fans can rate performances, interact with other viewers and access bonus content such as song lyrics. Consumers with a Verizon Android handset can vote for their favorite contestants as often as they want, see backstage goings-on via Verizon Live View and watch episode highlights.

7. Giving sports fans a game of their own

Sports programming is often cited as ‘low-hanging fruit’ when it comes to social TV and the second screen: Fans are especially interested in supplemental information and a group-viewing experience.

This Star Player app from Heineken, launched in 2011, provides a second-screen gaming experience for the soccer fan without distracting from what matters most: the match. The Star Player allows viewers of UEFA Champions League games to interact with the action in real time (and, with the latest update, in eight languages), syncing with the game clock when the match begins. Users then earn points by predicting game events such as goals and corner kick outcomes and by answering questions during periodic pop-up quizzes.
Players compete against friends, in a mini-league, and can also check their rank against all the app users. ‘Dwell time’ with the app has averaged 56 minutes. 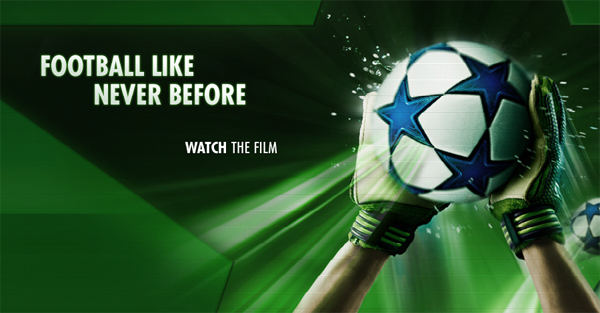 Adding hashtags to ads, increasingly common practice over the past year, is one of the most basic ways to extend an ad beyond 30 seconds and one channel. An Accenture study conducted in March found that 18% of the US consumers surveyed had noticed a hashtag in an ad and that 7% had then searched for the hashtag on Twitter.

Audi was the only marketer to include a hashtag in a 2011 Super Bowl ad. For this year’s
Super Bowl, which featured an array of hashtags during the commercials, the automaker ran a spot promoting its daylight-simulating LED headlights. A group of young vampires partying outdoors at night is incinerated by an Audi’s bright lights; #SoLongVampires was the hashtag. Viewers who entered the hashtag in Google rather than Twitter saw an ad for Audi’s ‘Vampire Party’ on Facebook.

In late April, a trailer for the Ridley Scott film Prometheus featured the hashtag #areyouseeingthis. Nothing all that new about hashtags in ads. But these Sunday night viewers had added incentive to tweet: During the next commercial break, a 40-second spot showcased some of the tweets the first ad had elicited. At one point that evening, the hashtag was the number two trending topic in the UK. 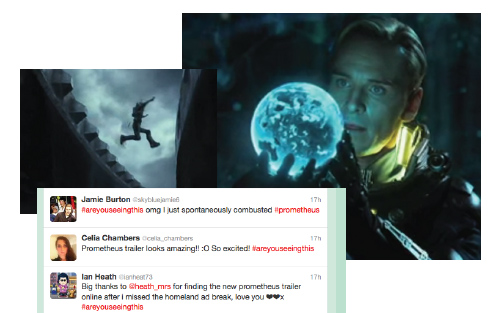 Transmedia – the practice of arcing story worlds over various platforms, with each thread tailored to the platform it lives on – is becoming a bigger buzzword with the proliferation of second screens. These can serve as a key entry point for consumers seeking deep engagement, with different channels communicating different things. Watch for marketers to experiment with opportunities here. For instance, Shazam’s Evan Krauss says we’ll soon see ‘Shazamable’ movie ads that provide an ‘interactive panorama experience’ on the second screen, enabling viewers to feel they are walking through a scene in the film.

Red Bull sponsored a backcountry freestyle snowboarding competition that was ‘Shazamable’ when it aired on NBC in March. Shazam users could access point-of-view footage for several competitors, enabling them to see both the wide view on the big screen and the snowboarder’s own dizzying perspective on a second screen. Shazam also linked app users with related social media streams.