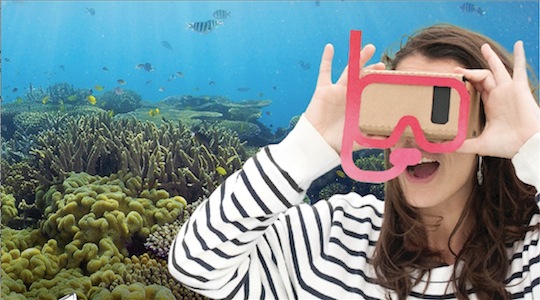 WWF has created a virtual reality experience of the Great barrier Reef using cardboard goggles and their smart phones.

‘See It, Save It’ was developed as part of WWF’s Reef campaign to save the reef and has been released ahead of UNESCO’s final decision on protecting the reef.

The campaign, which uses beta technology developed by Google Creative Labs, lets people use their smart phones to see 360-degree views of certain parts of the reef.

People can then show their support by becoming a reef ambassador and “claiming” a part of the reef, an option they have to do both on the website or once their viewing the reef.

People can put their phones into Google Cardboard to view the reef to enhance the experience.

Those who don’t have Google Cardboard are also able to view the reef on their phone screen.

The experience allows people to move their phone in every direction giving them a different angle of the reef to look at. When pointed at the ground users can see the sea bed and when looking up the sun is shining through the water. Depending on which location users are looking at, different sea creatures are swimming around. The experience is enhanced with ocean noises coming out of the phone speakers.

When exploring the virtual reality people are prompted to click on a section of the reef to become a brand ambassador in support of WWF’s campaign.

Google Cardboard is an initiative by Google; a pair of cardboard goggles that users can insert their smartphones into to experience a 360-degree virtual reality.