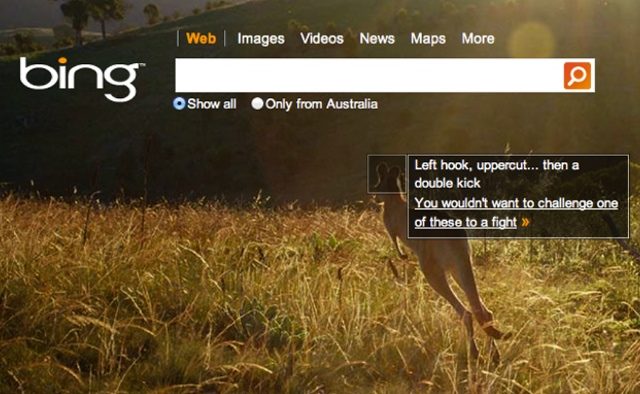 On Tuesday Bing officially removed the beta tag from its Australian site.

Though the search engine launched officially over two years ago, the local site was still considered to be in beta as the company localised its functions.

“We got to the point where we could say with confidence that users weren’t losing anything – that there weren’t any lost results, but actually things you don’t receive elsewhere,” Kurt Fulepp, marketing manager, Bing, Australia, told Marketing.

“Over the last two years, not only have we brought relevance and product quality, we’ve ensured the product features that differentiate Bing from, say Google, are relevant to this market.”

Stefan Weitz, senior director of Bing search, US, told Marketing the search engine now holds 27% market share in the US, when the partnership with Yahoo! is included. Bing alone represents approximately 15% of that share. He explained his thinking has developed from search being a zero-sum game and that the brand’s strategy has evolved from competing with Google on the core algorithmic functions, conceding it has a huge head start and a good product. Weitz says Bing is following user demand by evolving search to use patterns. For example, experiences that string together a sequence: restaurant search, reviews, telephone number and directions.

The second strategy is to take search to a platform level, rather than driving people to Bing.com homepage. Weitz explained that this is being driven through partnerships and alignments across Xbox, Windows Phone, iPad, Twitter, Firefox and Facebook.

The level of social integration with Bing’s US product hasn’t yet reached international products, but the partnership with Twitter allows Bing to predict trending topics and adjust its results accordingly. Features like this are anticipated to roll out internationally in the near future.

Questioned on the opportunities for SMEs and marketers tracking these social interest spikes, Weitz explained that the product couldn’t currently carry predictive investment in these spikes.

An Australian consumer-facing campaign is planned to begin very early 2012 – sources indicate March. The messaging itself is still being developed, but will likely centre around ‘helping you complete tasks’ and target 18-34 year-olds. It’s being developed locally by BMF.

Bing intends to stay consistently in market once the campaign begins.