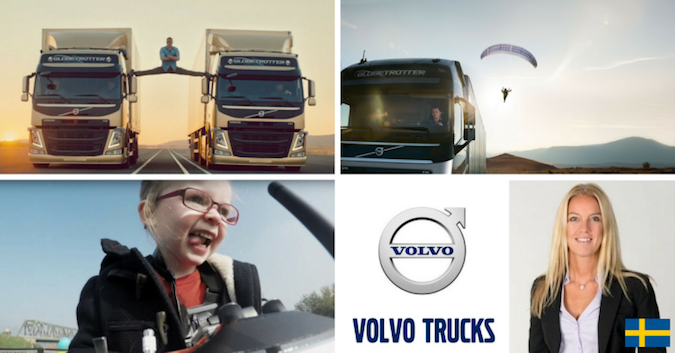 Volvo marketing and communications director Ingela Nordenhav tells Emma Roborgh how she got one of the world’s best-known B2B video content play ideas across the line.

The natural assumption would be that it would take a lot of ‘selling in’. After all, Jean-Claude Van Damme, doing an ‘Epic Split’ in between two moving trucks was a pretty radical departure for Volvo trucks, which had previously spent the majority of its marketing efforts focused on getting the right technical messages to their end users – drivers – or the people who bought the trucks as a business asset.

But the ‘I know what this needs – it needs Van Damme doing the splits!’ Idea passed muster with surprisingly little resistance; something Volvo’s marketing and communications director Ingela Nordenhav attributes partly to her tenure at the company (she started her career at Volvo in 1995) meaning that her peers and superiors were truly confident she was doing this purely for the benefit of the company, and not to make headlines herself.

Unlike car launches which happen day in, day out, truck launches are a lot rarer – in fact, this launch was the first in 20 years, so creating a song and a dance – or indeed an epic split – is somewhat warranted. However, it was an eyebrow-raiser.

“Getting everyone on board with the idea was surprisingly easy, we needed to do very little convincing,” Nordenhav says.

Role longevity is a somewhat rare commodity in marketing, especially here in Australia where the general pattern is two years, make an impact, move on. And Nordenhav appreciates that for some people who stay in the same company for long periods, it’s easy to become stale: “There’s a danger you can default to the way things have always been done.

“I don’t have too much experience from other companies, but that trust was critical to getting both the ‘Epic Split’ and ‘Look Who’s Driving’ campaigns over the line.

“And it was trust in a different sense, too. I mean, everything’s subjective in marketing and communications, right?

“I wouldn’t go into an engineering company and start to question their drawings, or to an accountant and query their figures, but with marketing and communications it’s very easy to have an opinion about that, regardless of whether you have training, qualifications and experience. So the complete trust that, yes, you know what you’re doing, and yes, we trust you’re doing it for the right reasons were key factors in getting those campaigns happening,” says Nordenhav.

Another aspect that made the campaigns – and Volvo’s subsequent marketing – so successful was the whole company began operating as a cross-functional team.

“I don’t think we really knew how effective and productive that would be, but that was really a key to success because then we could make sure that the sales training was integrated with the campaign. All of the messages were the same and people felt comfortable with the way we would describe certain features and explain topics.

“I believe that’s how we will get greater success in the future, operating as one, integrated team – marketing, PR, content, sales. That way we can make sure that we can measure the effect of what we’re doing also business-wise and not just awareness-wise.”

Ingela Nordenhav is an international keynote speaker at the B2B Marketing Leaders Forum in Sydney on 16-18 May 2017.

Tags:
Previous Article
Why you can’t rely on social media to drive digital audience growth
Next Article
How Evernote silenced the critics by embracing customer-centricity