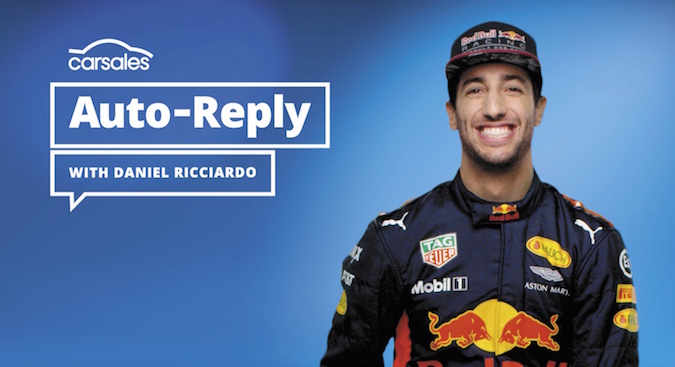 Created by CHE Proximity, the video series features in a multi-channel campaign, led by digital screens and supported by a national OOH buy, social media, TV and brand activation at the 2017 Formula One Australian Grand Prix this weekend.

Ricciardo will also be sporting the Carsales logo on the chin position of his driving helmet and on both sides of his Red Bull Racing team cap during every race of the 2017 Formula One season.

Carsales CMO Kellie Cordner says the campaign brings to life the partnership with Ricciardo, which was established to support Carsales’ overall brand strategy to help Australians buy cars with ease and confidence.

“The connection between Daniel and Carsales is evident. He knows cars and we know cars,” says Cordner, of the partnership which was announced in February.

“It’s not often you get to write for one of Australia’s most engaging sportspeople, particularly when they’re as innately funny as Daniel. So our mantra was to let Daniel be Daniel,” says Ben Birchall, creative director at CHE Proximity.