In a neat piece of contextual work, toy Etch A Sketch has released a campaign in the US responding to its comparison with Republican presidential nominee hopeful Mitt Romney’s campaign.

Following the description of Romney’s previous campaign for the Republican nomination as “almost like an Etch A Sketch” that could be rolled out again for the coming campaign against President Obama, sales of the toy jump 1556% in a week, according to AdWeek.

Etch A Sketch, owned by Ohio Art, moved to capitalise on the mention, releasing a campaign declaring its political neutrality.

“We have a left knob and a right knob for each political party. (But remember, when both work together, we can do loop de loops),” reads one of the print ads, alongside an image of the American flag drawn on an Etch A Sketch. Another of the ads reads, “Politically we lean right down the middle.”

In an email to AdWeek, the toy maker’s agency Team Detroit wrote, “Etch A Sketch doesn’t take political sides. We believe that when the left hand and the right hand work together, magic happens. [These] ads were developed to convey that message.” 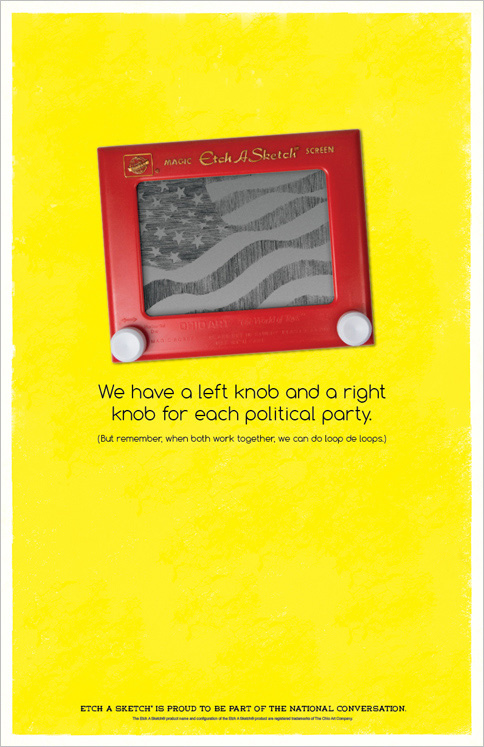