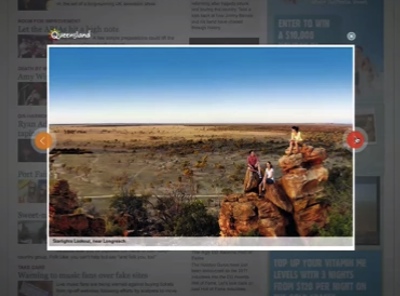 Fairfax Digital has launched a new ad solution across their network that allows advertisers to buy out an entire column of a page and embed interactive and downloadable content into the unit itself.

The product, dubbed Big Unit, allows advertisers to buy out the entire right hand column of pages that feature the redesigned format. Advertisers will be able to embed content such as social media and sign-up tools, videos, photo galleries, downloadable brochures and interactive maps.

Officially launching in February, trials have already taken place and Fairfax calls the results ‘strong’. “The Big Unit is a powerful new solution for our major advertisers and has already delivered strong results for key clients who have used the product prior to its official launch in February,” says Ed Harrison, commercial director at Fairfax Metro Media.

Major advertisers that have either already executed or committed to campaigns using the Big Unit include Tourism Queensland, Nestle (Toddlers Milk and Milo) and Samsung.

In an announcement about the new solution, Fairfax says the size and functionality of the ad unit made it possible to convey various messages in one ad format and feature video and scrollable image galleries that pop up into the centre on the screen when the viewer clicks on the ad.

Fairfax has likened the Big Unit to AOL’s Project Devil which launched in the US last year.

The video below is a demonstration of a Tourism Queensland campaign using the new unit.