From stunts to sales: how brands are preparing for the space tourism boom

From stunts to sales: how brands are preparing for the space tourism boom

Some brands know no monetary limits in their journey toward the final frontier of advertising as all things ‘space’ gathers momentum in news value and hype, writes Melinda Schaller.

Omega went in 1962. Coca-Cola went in 1985. Red Bull took itself there in 2012. Lavazza has built a coffee machine to send there next year. And one little Aussie brewery has even developed a beer that can make the journey…

Space excites everybody, whether they admit it or not. It’s why entrepreneur Elon Musk is more known for SpaceX then he is for Tesla cars (or, his origins – PayPal) and why some of the most recognisable and admired actors of the 21st century have given hundreds of thousands of dollars to Richard Branson for a seat on his Virgin Galactic spacecrafts, which don’t even have a launch date yet.

Not to mention the array of attention space receives on social media. NASA (the USA’s National Aeronautics and Space Administration) is the eighth most engaged brand on Twitter, according to Nestivity, a community engagement platform for Twitter, with 6.96 million followers – that’s double the following of mega brands Nike (3.53 million) and Coca-Cola (2.59 million).

And who could forget Red Bull Stratos’s leap from space made by Felix Baumgartner in 2012? To date, more than 36 million people have viewed the YouTube video worldwide with the live-stream watched by eight million viewers as science and branded content came together to make PR history.

A piece of the action

With the age of space tourism not just upon us but now an absolute certainty, it is no wonder brands are setting their sights on the space market. Making the giant leap in 2015 will be Tokyo-based Otsuka Pharmaceuticals, which plans to send an advert of sorts, for its soft drink, Pocari Sweat, to the moon.

The company will utilise private space companies – such as SpaceX – to deliver a one-kilogram ‘Dream Capsule’ in the shape of a can of Pocari Sweat to the lunar surface in the first half of next year.

READ: And the first brand on the moon is… Pocari Sweat? »

The titanium can will not only contain the soft drink in powdered form, but also the dreams of children from all over Asia. Otsuka’s aim of the advert? They say it is to inspire young people to become astronauts with aspirations of travelling to the moon.

As nice as it sounds, the true value in this type of advertising is in media exposure and PR pull. Not to mention the illustrious title of being the first to place advertising real estate on the moon. 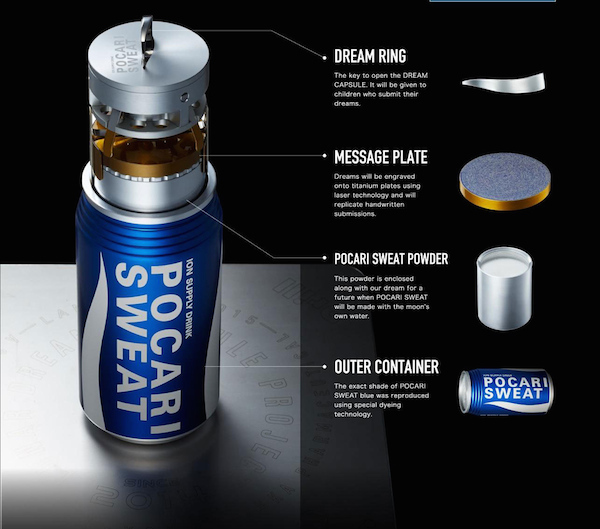 Ventures by brands such as Pocari are the result of space agencies and companies planting a seemingly winning idea back at the beginning of the millennium: if space can be considered advertising real-estate, why not outsource the production of key technologies and products for use in space and get brands to pay the bill.

Lavazza have answered the call-out and will this year provide the authentic Italian espresso to astronauts on the ISS (International Space Station), proving that coffee truly is a beverage without borders.

Working together with the Italian Space Agency (ISA) and space food and technology manufacturer Argotec, Lavazza has named the creation ‘ISSpresso’.

The coffee maker answered the ISA’s formal request for expression of interest that the Agency keeps open to public-private partnership projects and activities to be carried out in the ISS. 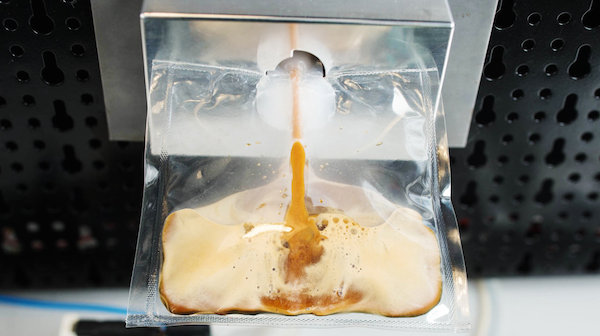 Roberto Battiston, President of the Italian Space Agency, explained: “ISSpresso is a perfect example of the way ISA’s decision to make ISS national usage rights available to public-private partnership initiatives can result in a valorisation of public resources for technological, economic, and social objectives.”

He adds that the aim of sending the machine up is “improve the quality of life of ISS astronauts.”

At the same time, Lavazza will also benefit from the promotion of the “image and spreading of the Made-in-Italy brand at an international – or better, ‘space’ – level,” said Battiston.

The coffee machine is due to be sent up into orbit November and in another headline grabbing stunt for the brand, the first ISSpresso will be drunk by the first Italian woman in space, Italian Air Force Captain Samantha Cristoforetti.

Regardless of the cost to produce the Lavazza machine, just getting up to the ISS is estimated to cost between $26.25 million and $36.75 million. And if you thought coffee prices were high in Australia for what you get, consider that the water used to make the coffee will be made from the recycled urine of astronauts.

However, if you can’t quite afford to put your own products and brands in space, there are plenty of companies who will gladly provide you with the medium.

One such company is US-based Bigelow Aerospace, which is selling naming rights for its expandable astronaut habitat – the Bigelow Expandable Activity Module (BEAM) called the Alpha Station – headed towards the ISS in 2015 for the seemingly moderate cost of US$25 million. To put that in perspective, FIFA’s major sponsorship partners pay between $25 million to $50 million a year, even in a non-World Cup year.

But will such spending and PR stunts manage to capture the world’s attention for long enough to pay off?

Andrew Banks, a news editor at News.com.au, says ‘yes’ as all things ‘space’ is not just interesting for readers, it makes extremely sharable content. However, he warns that the story cannot last: “Space will always pay off – but the big fear is over-saturation. Public interest is fierce at first but wanes quickly,” he explains.

“There are going to be misses. The hits come about through whether the story matters to everyone and can be shared, whether it can be explained quickly and whether it has a dramatic effect on the everyday lives of every individual.”

As to what it is it about space that generates so much public interest, Banks believes it is the great unknown: “The uncertainty and the tremendous wonder it generates.”

And companies don’t have to launch themselves into space or have their brands plastered on spacecrafts to join the space race.

Google has a piece of the action via its Lunar X competition – a prize pool launched in 2007 that offers a $20 million reward to the first team to “land a robot on the surface of the Moon, travel 500 meters over the lunar surface, and send images and data back to the Earth.”

The competition has inspired many to take a stab not just at the prize money, but also the glory.

White Label Space – a Netherlands-based group of space professionals – was formed in early 2008 inspired by Google’s challenge. Interestingly, to pay for its mission, the group plans to raise the money by going after sponsorship dollars from one or more large global brands.

This, and space tourism, is where the biggest opportunity lies for brands – in terms of affordability.

A whole new range of food and beverages will need to be developed for the in-flight service aboard any spacecraft transporting tourists. But there is a challenge in developing food and drinks that can maintain their taste and texture and be held together in an environment of microgravity (not quite zero gravity). 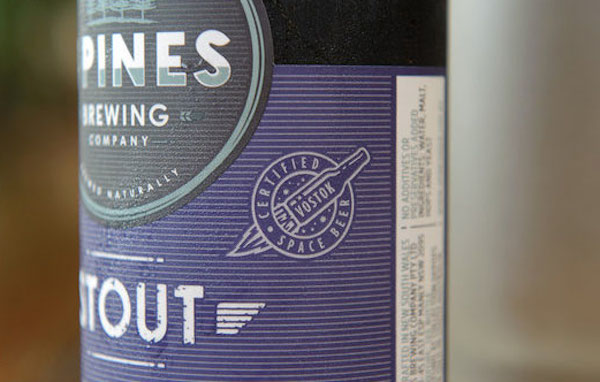 One Australian company has already thought ahead and completed preliminary tests on beer. While no research has been done on the effects of alcohol on people in a microgravity environment, Aussie brewer 4 Pines Brewing Company and Saber Astronautics Australia have been developing a beer meant for consumption in space to capitalise on the impending space tourism market.

The project began in 2010 and has already been tested with positive results.

“Humanity loves beer. We always have and always will. The space tourism market is emerging and will take off in less than two years, with thousands of screaming, happy space fans booked on sub-orbital flights. [It’s] guaranteed some of them will want the option to enjoy a brew while looking at our big blue globe. Why deny them the chance?” the company says on its website.

The widening space market place and space tourism is poised to provide companies and brands with a unique and unparalleled global media attention and exposure.

And while brands in space isn’t anything new – Omega (1962) and Coca-Cola (1985) have already ventured beyond the Earth’s atmosphere becoming the first commercial brands in space – what is new is the level of interest in all things cosmic as a host of private companies come closer and closer to providing space travel for the general public.

No longer something to just aspire to, placing your advertising, branding and PR stunt ideas in space in now a forgone conclusion and it will go to the highest bidder and the most creative.

Melinda Schaller is a freelance journalist currently living in Switzerland. She has spent almost 10 years working in and reporting on the marketing and advertising industry in Europe and Australia.