Campaign: Kick for Your Country

Heineken is a globally recognised brand that has a long association with international rugby, having been a sponsor of the Rugby World Cup since 1995. The brand already enjoyed the fourth-highest level of spontaneous awareness of any beer brand in Australia, but the 2011 Rugby World Cup in New Zealand presented an excellent opportunity for it to engage Australian consumers and drive real local returns from the global sponsorship.

The challenge was how best to leverage the sponsorship and ensure Heineken’s voice cut through the World Cup clutter of the other 17 sponsors, many of which had significantly larger spends. It also had to take into account a declining Australian beer market and the number of brands competing to attract the attention of the male 18-to-34 target demographic.

The agency was tasked with developing a unique and immersive brand experience to excite and engage its male 18- to 34-year-old audience, ensuring that Heineken’s voice was heard among the other Rugby World Cup sponsorship programs. It also needed to deliver a 27% uplift in sales and build momentum in the lead-up to Christmas.

Naturally, as a global sponsor, Heineken was already investing in a TV spot. However, this would not be enough to ensure that the brand engaged and excited the savvy and switched on target audience. A value-adding experience was required that tapped into their interests and passions to lift the Heineken brand above its fellow sponsors.

Research indicated that members of the target were highly likely to own a smartphone and were also highly competitive in nature, readily jumping at any opportunity to outdo their mates. These insights, along with their love of rugby, led to the creation of the ‘Kick for Your Country’ app, which was at the centre of the campaign. This was supported and augmented by the innovative merging of TV and mobile screens in order to maximise budget and deepen the relationship with the audience.

Fox Sports, with its unique in-house stats team and live, in-match broadcast capability, was identified as a vehicle to introduce a new way of trans-media match viewing that would make sure Heineken was a talked about brand during the televised tournament.

The key platforms – mobile, digital and TV – worked seamlessly to cross promote and raise awareness. The primary function of the media spend was to inform consumers about the ‘Kick for Your Country’ app that was developed. The entire digital budget was spent on driving consumers to download the app and TV activations were negotiated as added value to the broadcast sponsorship.

A critical part of the campaign was the partnership with Fox Sports. Research showed that Heineken drinkers in the target demographic were highly likely to view Fox Sports, which made it an essential property to target. A number of in-program features were employed to attract visitors to engage, and presenters showcased and discussed the app, while ads and editorial on foxsports.com.au drove users to view the app demo video, click to download it and find venues to watch matches.

Other sport, news, gaming and entertainment sites, and apps were also targeted in line with the target’s media consumption patterns, with search a key part of the mix. The packaging of the product itself was also utilised with QR (quick response) codes on the bottles and packages linking to the mobile site and encouraging consumers to download the app. Heineken’s Facebook page promoted the app throughout the tournament. The app itself was built around the premise that Heineken and rugby fans alike have all dreamed of kicking a winning goal for their country. This unique app allowed fans to be part of the on-field action and kick real penalty goals and conversions, live, as they happened during the games.This meant that anyone with access to a smartphone could take the same kick, from the same spot, in the same conditions as the players.

The app was simple to use, but highly complex to develop with over 4000 data points, including exact field position of the ball, wind speed and ground conditions etc needing to be processed so users could simultaneously kick on their mobile at the same time as the ball was being kicked on the field. The end result was a never-before-seen integration of live TV and real-time mobile play.

Outside of matches, users were able to practise their skills and climb the leader-board in the ‘Training Challenge’. To appeal to the competitive nature of the target market, users could also play against their friends on Facebook. In addition to the gaming modes, the Heineken Rugby Clubhouse application also kept users up-to-date with tournament information and used GPS (global positioning system) mapping to find the nearest official Heineken Clubhouse venue for the best Rugby World Cup viewing experience.

The campaign outperformed its metric goals and more than delivered on the client brief. What was particularly impressive about the campaign was its success in lifting Heineken out of the scrum of its fellow sponsors. It went from merely being a Rugby World Cup sponsor to being a genuine part of the experience. As one judge noted it was “immersive, engaging and smart” and widely acknowledged to have exceeded business objectives and actively engaged consumers throughout the period of the tournament.

Heineken tripled its average monthly searches in Australia during the core month of the World Cup. The live ‘Kick for Your Country’ game clearly resonated with its target as over 51,000 people downloaded the app during the month of the tournament.

Consumers not only downloaded the app, but, having done so, actively engaged with it throughout the World Cup. More than 2.2 million live kicks were taken, with over seven million training kicks recorded. As one of the judges remarked, “It brilliantly tapped into the target market’s passion for the game itself, their competitive nature and a desire to be part of the action.”

Users agreed, with the app receiving four out of five stars and being the second-ranked free sports app during the tournament. The tactical media buy contributed significantly to the number of downloads with clear spikes recorded when key elements of media were in market, prompting one of the panel to note, “Their bold move at placing 100% of the digital budget behind creating awareness and driving apps paid off.”

Critically, the campaign delivered tangible results to the bottom line. It eclipsed its target of a 27% sales uplift to achieve an impressive 35% growth in sales. It also gained traction with its existing Heineken brand adorers as the number of buyers increased throughout the period of the World Cup, increasing their volume consumption by 20%. 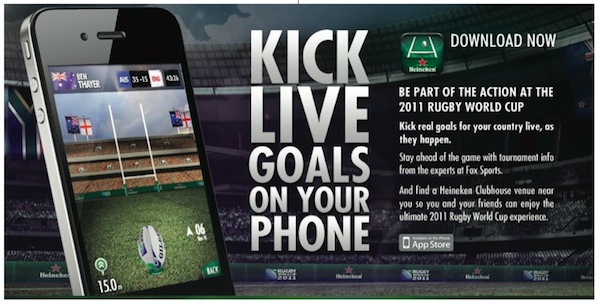 Tags:
Previous Article
In demand: mid-range marketing and sales professionals
Next Article
Levelling up your customer dialogue: the what why and how, part 1