In keeping with Pedigree’s stated belief that every dog deserves a loving home, it partnered with a not-for-profit organisation PetRescue to try and improve the plight of the 100,000 dogs in shelters across Australia that are euthanised each year because they are unable to find new owners.

The Pedigree Adoption Drive initiative needed a fresh campaign to raise awareness for the plight of these dogs and to try and change the misperception that shelter dogs are damaged in some way. It also needed to address the reality that fewer and fewer people are visiting dog shelters year on year due to geographic and time constraints.

The client’s brief was simple. It wanted to reach the widest possible audience in order to first raise awareness of the fact that over 100,000 dogs a year were euthanised, and second to change people’s perceptions of the nature and character of shelter dogs and ultimately to drive and increase the number of adoptions taking place across Australia. 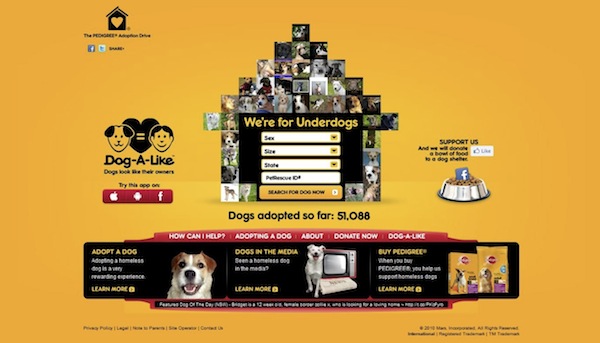 The key stumbling block to increasing the number of shelter dog adoptions was the fact that the volume of people visiting shelters was in decline. The agency therefore needed to find a way to bring people face to face with the dogs to see for themselves that they were healthy and to create an immediate bond to encourage adoption.

The first step was to create a unique canine search engine that centralised every single dog in Australia’s 716 shelters into one single database. This provided the technology to help make searching for a dog as simple, accessible and much fun as possible.

A series of online and offline activities were designed to facilitate the matching of dogs and potential owners with a mobile app (for iOS and Android) and Facebook application called Dog-A-Like at its core. The app brought shelter dogs face-to-face with potential owners to enable people to find their perfect match from the newly created PetRescue database.

This was supported by experiential and video activity to help create an emotional bond with the target audience to maximise the chances for adoption.

The campaign was launched with an experiential ‘Underdog Day’ at Bondi Beach in Sydney where yellow branded dog leads were tied to 1.5 kilometres of the beachfront each with the profile of an available adoptee dog. Through a unique online code attached to the profile, people could enter the code into the PetRescue search engine to find out more and adopt. The widespread publicity created from this event drove the target audience to the online activity at the centre of the campaign. The Dog-A-Like mobile app and Facebook app used facial recognition software to create an instantaneous emotional connection between potential owner and dog. Playing with the popular notion that dogs often look like their owners, it was designed to match the features of people with those of every single available shelter dog in Australia until a perfect match was found. Users were then given the option to adopt a pet when otherwise it would be put down. 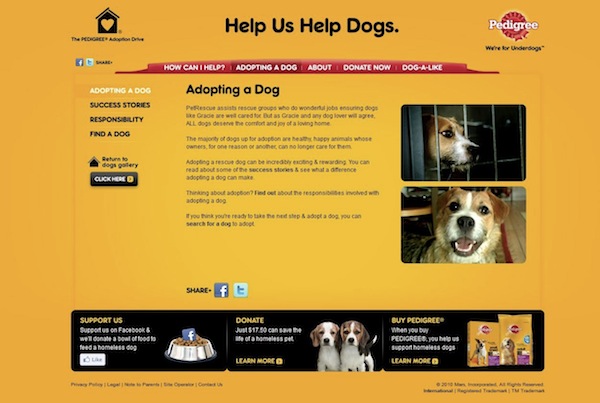 The app was loaded with clever touches, such as the built-in ‘whistle’ feature that takes the user straight to the Dog-A-Like’s adoption page when they whistle into the phone, and a ‘shake’ functionality that allowed users to either make a donation or give their perfect match a bowl of Pedigree dog food.

The emotional connection between the dogs and the target audience was also deepened by the creation of an eight-part online documentary, Underdogs, which followed the affecting stories of how five shelter dogs found a new adoptive home. This served to address the perception that shelter dogs were damaged in some way by taking the audience on their journey from being homeless to finding a loving home.

Dog-A-Like became the number one app in the Australian iTunes store for two weeks – and, over a few months of the campaign, more than 3500 dogs were adopted. It became Australia’s most successful rehoming campaign with more than 26 million media impressions. The campaign reached 5.8 million Facebook users and the 200,000 bowls of dog food pledged via Facebook ‘Likes’ ran out in the first month. As a result, it made Facebook’s Top 50 Apps worldwide in 2012. 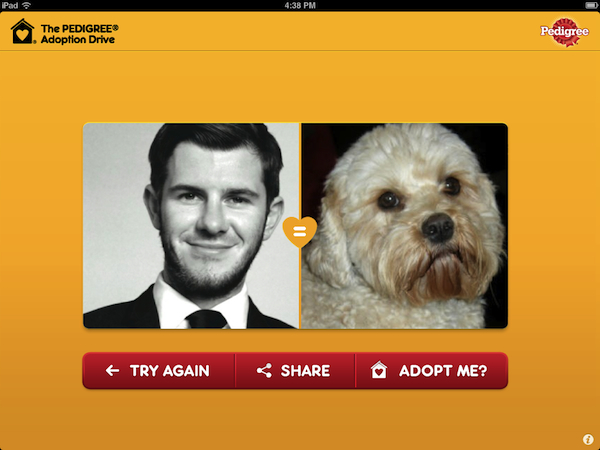 Impressively, the Underdogs documentary garnered such an unprecedented online audience that it inspired a national TV series with a second series due to air in 2013. That an element of the creative content of the campaign has taken on a life of its own is an impressive feat and one of the holy grails of a successful marketing campaign. As one judge noted, “The agency clearly tapped into a resonant creative execution, which more than fulfilled the client’s brief to change perceptions.”

Most importantly, a 36 percent increase in the number of dogs re-homed has been achieved since the program was launched, amounting to 2200 dogs each month: Pedigree’s most successful rehoming initiative to date. A key driver of this was the way in which the agency developed an innovative and effective mechanism to bring the shelter dogs to the target audience. 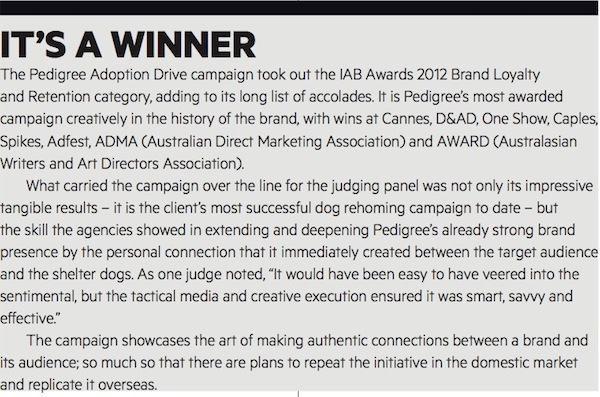 Watch the first two instalments of the online series below, and visit the campaign’s YouTube channel for more.