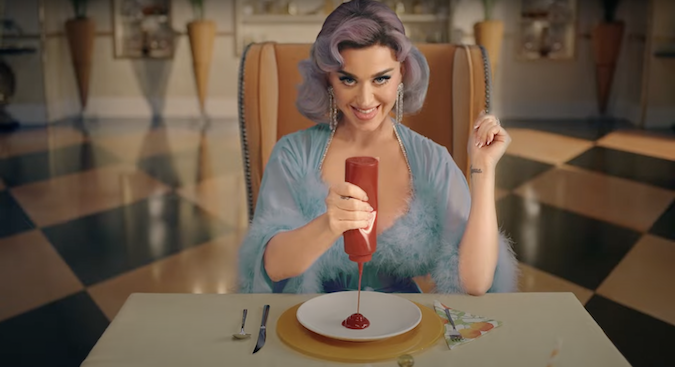 Menulog, the food delivery company, revealed that Katy Perry will star in its new worldwide campaign in a teaser spot released today.

The full campaign will begin June 8th, during Nine’s coverage of the State of Origin tournament. The new campaign is the third iteration of Menulog’s “Did somebody say” jingle.

Following the success of the Snoop-led series, Menulog developed a campaign featuring homegrown Aussie musicians such as Baker Boy and D’Arcy Spiller.

The teaser shows brief clips of what appears to be a Muppet-Katy, rollerblading, dancing, and the colourful pop star preparing to dine.

Perry says that, “working with Menulog was a really fun and natural experience.”

“Ordering takeaway is a regular Saturday night for me,” says Perry.

“It was fun to channel that into a video that is a combination of the things that bring joy to my life: poppy bright colours, wild outfits, and food puns sung over a catchy tune.”

Simon Cheng, marketing director at Menulog, spoke about the campaign.

“Katy Perry brings unparalleled star power and her playful nature matches ours to a tee. Following the huge fan support we’ve had for each version of the track, we reckon Aussies are going to love this new take. Stay tuned for June 8 for the reveal. Bon Appetit!”

It’s shaping up to be a match made in heaven. Be sure to catch the new ads during the State of Origin, as well as on social and digital platforms.

Previous Article
Video on Pinterest is more effective as it inspires, rather than interrupts
Next Article
Not So Serious Podcast: Influencers having a big impact on election

Oatly make “milk, only made for humans”

Menulog have recruited Wendell Sailor for State of Origin