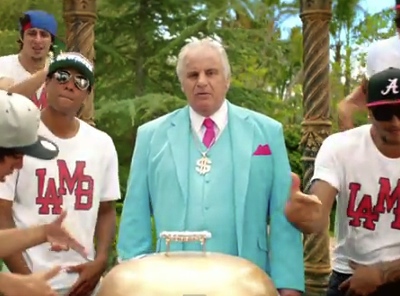 Disillusioned by a pop culture in which we go gaga for a lady who wears lamb instead of eating it, ‘Lambassador’ Sam Kekovich has taken it upon himself to introduce his own brand of ‘chopular’ culture to combat ‘unAustralianism’ in the lead up to Australia Day.

In his address, Kekovich says that with unAustralianism having gone viral, his only option is to change his tune and do the same to combat the “litany of lamentable behaviour” that a lack of lamb has led to.

He claims that popular culture has hit rock bottom citing Shane Warne as an example: “The gossip mags have really gone googly-eyed over Shane Warne, who went from bowling overs to make overs to get his leg over, bleaching his pearlies for Hurley. The old Warnie would never have chosen a starlet over a cutlet. Or tweeting over eating.”

The campaign, by BMF, aims to turn the three minute Barbie Girl video clip into a viral sensation and claim the top spot in Nova’s Australia Day Countdown.

Check out the clip, which also features pop starlet Melissa Tkautz, Australia’s Got Talent winners Justice Crew and a cameo from Richard Wilkins.

Marketing is interested to hear your reaction to this reworking of a pop song for the purpose of selling meat, especially when compared to Coles’ latest release of Normie Rowe pushing hormone-free beef to the tune of Shakin’ All Over. Let us know in the comments or tweet us @MarketingMag.