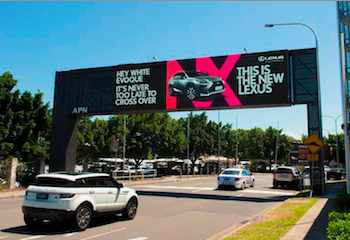 Australia’s most sophisticated and interactive smart billboards went live this week as part of the ‘This is the New Lexus’ campaign via M&C Saatchi in collaboration with APN Outdoor and TMS.

The new brand positioning was unveiled in October with the launch of the NX Crossover model.

The billboards are able to identify the brand, model and colour of passing vehicles allowing them to trigger a personal message to passing drivers. Messages such as “Hey white Audi driver, it’s time to Crossover. This is the New Lexus”, will be seen on the digital display.

Messages can also be based on variables such as time of day, weather and traffic conditions. Operating in high traffic areas, the activation features more than 80 different configuration of dynamic messaging.

A series of cameras on high rotation capture all the passing traffic, then the images are sent to the APN Outdoor Classifier. This hi-tech device matches images to its database of vehicle makes, models and colours, in addition to the other variables.

“This campaign is an excellent example of the opportunities available to advertisers”, says APN Outdoor CEO Richard Herring.

Lexus Australia does not want to simply tell everyone ‘This is the New Lexus’, they want to focus on how they say it.

“Using innovative technology such as this activation helps us to further reinforce that there is a change at Lexus”, say Lexus Australia, corporate manager, Adrian Weimers.

“It’s quite epic to have a 42 square metre billboard having a chat to you as you drive past”, says Walsh.

Billboards are live at the following locations:

Tags:
Previous Article
Your 7 content marketing comrades
Next Article
2015 is the year mobile in Australia walks the walk