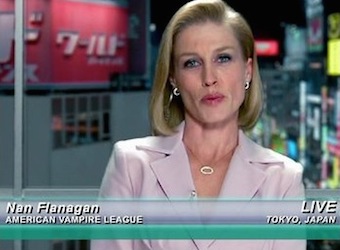 An analysis of the cult vampire TV series, True Blood, has revealed new insights into the representation of public relations in popular culture.

Murdoch University academic Kate Fitch investigated the representation of public relations in the HBO television series and found a complex portrayal – and implicit critique – of the industry.

“However, today’s audiences have a very sophisticated understanding of public relations.”

“I focused on representations of public relations in the first four series, finishing with the bloody death of AVL spokesperson turned bad, Nan Flanagan,” Fitch says.

“Flanagan is initially represented as a rational and corporate-style spokesperson before the AVL is revealed as a front-organisation for the shadowy authority.

“Rather, Flanagan’s practitioner plays with multiple identities of public relations and adopts multiple discourses from social justice to corporate greed.”