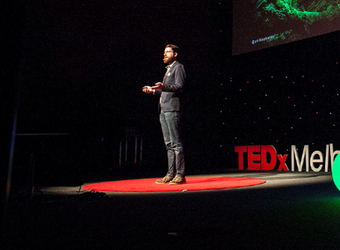 Technology has become synonymous with digital, with silicon-based computing, but that’s a limited view for business to take, argued Phil Phelan, in his recent TEDxMelbourne talk.

Even in its choice of name, Silicon Valley could be said to have limited its own future as a hub of technology – if the next wave of technology moves beyond computer chips, silicon becomes yesterday’s innovation and today’s commodity.

We caught up with SapientNitro’s Phil Phelan after his talk at TEDxMelbourne recently to ask him why business shouldn’t limit its view of what technology is and what programmable matter means for the world.

Small developments in organic technology are fascinating but niche, but add them all up and the vision of a future where any object or material is programmable and reprogrammable starts to dawn as not-al-that-farfetched.

Marketing: Can you please explain your position that business’ view of technology is limited?

M: Why is that an important limitation to be aware of?

PP: First, because it’s the duty of strategic leaders in businesses to be thinking about what’s over the hill, about readying their business for the next horizon. In the technology industry – be it social media platforms, mobile phone companies or any of the other myriad sub-sectors – life is competitive, brutal and short. Ask Nokia’s investors, ask Blackberry’s investors, ask MySpace, ask the investors patiently waiting for Yahoo’s next move. Hemingway when asked how he went bankrupt famously said ‘gradually then suddenly’.

Second, because historically technological innovation rarely comes ‘the big middle’. In the middle you’re making money and it’s hard to change. Relying on search engine businesses to bring you disruptive innovations that aren’t based on applications of algorithmic search is optimistic at best. Businesses need to look to the edge and bring those ideas forward and inside.

M: What time frames are you talking about?

PP: Much sooner than you think is the best answer. Each technology wave has a shorter window, and each builds on the last. It’s also, somewhat of a cliché, but many of these ideas in a primitive sense are sitting around right now waiting for someone to pay attention to them and to connect them up.

M: Is it fair to say that getting marketers (and any decision-maker in general really) aware of mid to long-term developments that are so ‘out there’ is a massive challenge? How do you address it?

PP: Actually no, I think that’s not fair. Most marketers and business leaders I know are often aware and interested in trends, in the future, in keeping abreast of new ideas. The challenge is often what to do with this information. As a marketer do I watch and wait for it to happen around me, do I start trying things now or do I start playing around with the ideas and let them start informing the current work?

The answer is that often even just the act of thinking about what’s over the hill can make the work today better, sharper.

M: What do you mean that manipulating matter is the last step of the digital revolution?

PP: Technology is a current state. Paper was a technology once, now it’s just a tool. So digital, too, will transition from technology to tool, and the last step is reducing digital back to its real core, not the hardware but the software, the code, the discontinuous information. At the end of digital there’s just code as a tool bringing to life new technologies made of something different.

M: There are some pretty serious implications to all this – for example the end of manufacturing could have a big impact on employment and society – would you agree with that?

PP: There are enormous implications across economics, across sustainability, across identity and culture. It has the potential to kill industrial manufacturing as we know it, to reshape our relationship to our own biology, to transform the way we use resources and energy in quite profound ways. Ideally these questions would not be left to the scientific and academic community to answer alone. There’s a role for business, for marketing, for consumers, for people even!