REA Group’s new brand campaign for Realestate.com.au hits this week with a high-impact media schedule. It used Nielsen and OzTam data to inform its strategic multi-channel and cross-platform approach. The seven television commercials starring Arnold Schwarzenegger, to be rolled out in the coming weeks, will capitalise on the 6.20pm time slot when many Australians are watching television while using a digital device.

The campaign aims to show property seekers that Realestate.com.au offers much more than property listings.

The series of television commercials begins when Arnold Schwarzenegger discovers realestate.com.au in his search to move back to his beloved Austria.

Under the incorrect assumption that the ‘.au’ is an Austrian site, Arnie goes through a comedy of errors in his quest to find the perfect home, despite the gentle prompts from his in-the-know Australian assistant, Dylan.

“The brand has been known and widely accepted as Australia’s number one property site. The fact is, we know our audience engages with our site throughout the property cycle, not just when they are buying and selling, so we wanted to expand perception of the site by creating an engaging campaign that tells a story.”

“When we conceived the creative idea of Arnold as the lead character, it was because we wanted cut through and to make people think differently about the realestate.com.au brand. The campaign ultimately is about discovery; so that people are curious to find out more.”

“The media schedule was planned to amplify the high impact of creative at launch in a way that would get Australia’s attention. Beyond launch, it’s really interesting to see a story like this play out over time across television, online, social media, print and outdoor media.”

Arnie said he hadn’t had this much fun on the small screen in a long time.

“I had such a fantastic experience making the commercials for realestate.com.au with acclaimed American comedy director John Hamburg. I learnt a lot about Australia in the process, like how to say Wagga Wagga. I also found it’s hard to find a home with a cheese cave or professionally equipped gym,” he said. 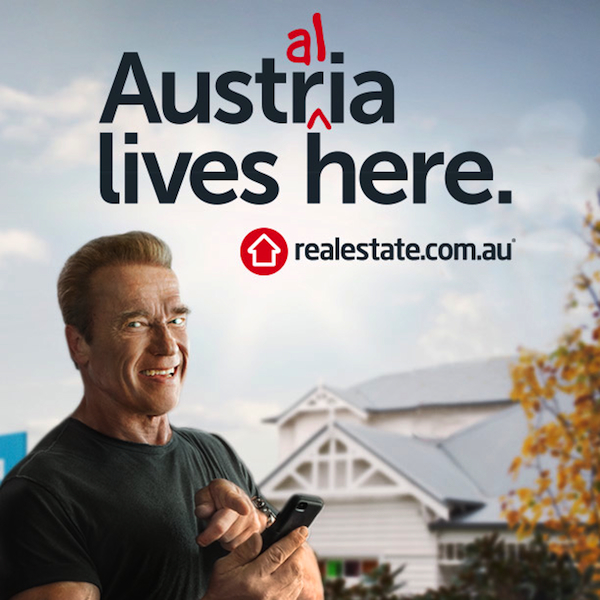