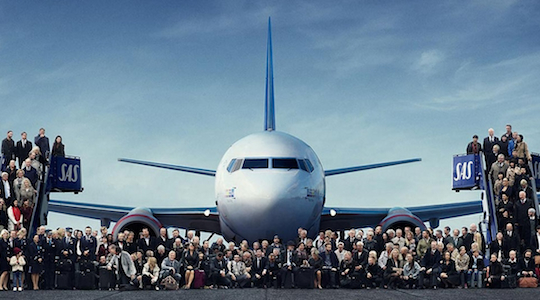 Scandinavian Airlines (SAS) is one of Scandinavia’s most popular carriers, providing over 28 million passengers a year with service to cities in 193 countries around the world. The company’s business model is to efficiently serve its core customer group – frequent fliers in Scandinavia who want ease and convenience when they travel.

Compared to the rest of Europe, the Nordic market for air travel is considered to be fairly large, with Scandinavian passengers taking an average of four trips a year (as opposed to Europeans in general who take an average of only two trips a year). When Scandinavians travel they tend to take short haul flights, and these are the exact types of trips that SAS is well placed to provide and has made the centre of its business strategy. But like many other airlines, SAS is facing the challenge of continued economic weakness in Europe. This has caused the company to re-emphasize improving operating efficiencies as well as refocus its marketing strategy in order to better control its brand and communication efforts (especially digital ones). This last part is not surprising given that SAS has an estimated 700,000 fans on Facebook and 50,000 followers on Twitter, along with 100 million hits to its website every year.

The new marketing strategy is called ‘We Are Travelers’, and a key component is an innovative editorial concept called Scandinavian Traveler. The platform will incorporate and integrate “a new onboard magazine, website, web TV, social media content, and newsletters” in an attempt to better serve passengers and fans. SAS believes its marketing strategy will promote “the idea of travel as part of our way of life” while celebrating “the joy and anticipation we feel before a flight.”

While the strategy might sound a bit idealistic, the company says that it arose from a clear analysis and deep understanding of its customers and the markets that it serves (the initial target audience is Sweden, Norway and Denmark).

Stefan Hedelius, vice president of marketing and brand at SAS, was sure to make the objectives of the new marketing strategy clear from the very beginning, and take efforts to communicate them effectively throughout the organization in order to ensure buy-in from the over 13,000 people who work for the airline. While improving SAS’ financial position is always important, the main focus of the ‘We Are Travelers’ campaign will be to build its brand and improve the overall experience that customers have with it, while at the same time trying to create a sense of community for the 80,000 people who fly SAS every day. Hedelius has also made it clear that SAS will track the campaign’s performance through the detailed recording and measurement of data.