SPC says ‘yes we can’ in Preserved Memories campaign

SPC says ‘yes we can’ in Preserved Memories campaign 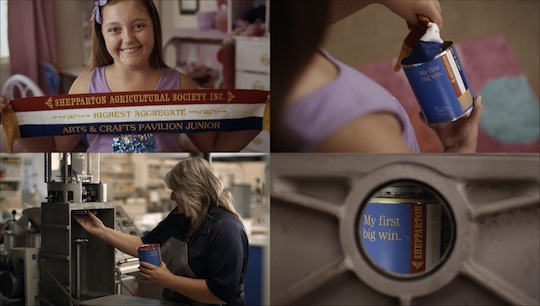 SPC Ardmona has launched ‘Preserved Memories’, a campaign for its 100th anniversary that invites customers to submit cherished objects for canning.

With the help of Leo Burnett Melbourne, SPC is aiming to show people why preserving for the future is important, by allowing them to preserve their memories in a custom SPC can.

“We all have special items that evoke powerful memories, but it’s easy for them to be lost or forgotten. Once they’re gone, they’re gone. We’re a preserving company, so why not preserve the things people love? Because just like Aussie fruit, we believe anything important is worth preserving” says Mark Malak, SPC senior brand manager.

Of the memories submitted, 100 will be selected and preserved.

Each can will be individually designed around the owner’s memory, creating a bespoke time capsule that keeps their item and its story safe for generations to come..

“People tend to think of canning as old world, when in fact it’s all about the future. Whether it’s preserving a memory or our country’s fruit, it’s important our kids and grandkids can still enjoy the things we do today,” says Jason Williams, chief creative officer, Leo Burnett Melbourne.

Creative for the’Preserved Memories’ campaign brings a heavy emotional appeal, celebrating the history of Shepparton, Victoria, and how the cannery is tied to the town and its history,

It also introduces the #WorthPreserving hashtag, and warns of the importance of preserving memories for fear of losing them.

SPC Ardmona, one of Australia’s last remaining canneries, has faced turbulent times in recent years due largely to falling sales, leading to a $22 million bail-out from the Napthine government in 2014 which enabled the company to continue trading in Shepparton, Victoria, where it forms a key part of the town’s employment and economy.

Previous Article
Sail of the century: the Volunteer Coast Guard is having an auction and you’re invited to buy some flotsam
Next Article
Will removing the gag endanger your company’s reputation?