With the FIFA 2014 World Cup kicking off six weeks today, the battle of the brands is starting to take shape.

Nike and Adidas, two of world’s largest sportswear giants, are at the centre of the battle where both their commercial strategies are starting to make a real impact, as the two gear up to maximise the advertising and sponsorship potential of the World Cup in June.

Traditionally in football, the endorsement of players and the manufacturer of national team kits have provided the battle ground from which these two companies compete every four years.

While Adidas kitted out 25% more of the teams during the 2010 FIFA World Cup than rival Nike, this year in Brazil, Nike will be the dominant kit supplier, supplying the kits to 10 of the 32 competing nations, one more than Adidas, according to Repucom, a global sports marketing research firm.

Today, perhaps the best illustration of how the two are performing against each other is via their efforts on social media. As the number of active users has increased considerably since the last FIFA World Cup in 2010, social media now plays a more prominent role than it ever has for brand activation.

In terms of overall fan and follower figures, Nike certainly has the edge. In fact, with over 35 million Facebook page ‘likes’ and 1.8 million Twitter ‘Followers’, Nike has over twice the amount of engaged fans across the two popular social media sites than rivals Adidas. Globally, Facebook is the social media site where both brands are finding most traction.

Today, Nike has approximately 18 million more Facebook Page ‘Likes’ than Adidas. Interestingly however, up until early February 2014 this gap was under five million meaning that in two months, Nike have increased their Facebook fan base by 13.7 million more users. What is perhaps more interesting is understanding where these engaged and potential new customers have come from.

Lynne Anderson, managing director of Repucom Australia, says: “Every four years, the battle between these two giants in sportswear comes to a head. The attention the month long FIFA World Cup commands means that globally it offers a vehicle for football brand activation like no other. While some brands like Adidas opt for Official Partner status others, like Nike have very obviously used social media to great effect and have at least stolen the edge in terms of online activation in the weeks leading into the tournament starting.

“The extent to which these huge brands are able to utilise social media means that as a measure of exposure and influence, sites like Facebook do allow us to see where the biggest traction for the two companies is, based on a number of indicators,” she says. “The US and the UK are both well established markets for both Nike and Adidas where they share similar size customer bases. The social media fans bases from these two regions are already equally large and therefore during 2014, growth has increased by no more than 10% in either market.

“Identifying the markets with more online growth potential however provides more interesting insight into the brand’s strategic approaches. Fans from the top 10 most engaged countries for Nike and Adidas’ Facebook sites surprisingly include the likes of India, Mexico, Argentina and Colombia. It is Nike however that has seen the greatest success in terms of growth this online base.

“With similar insight, it is possible to see not just where these brand battles are being fought out, but where they are being won,” says Anderson.

Understanding the demographic of a local market as well as the growth in that market via online communities around the world, allows brands to find these potential gaps and steal the march on rivals. Through social media and for the time being at least, Nike have that edge. However, as Official FIFA Partners, Adidas will be using their status to great effect during the tournament itself. Identifying the true victor between the two brands will have to wait until the World Cup is won, this July. 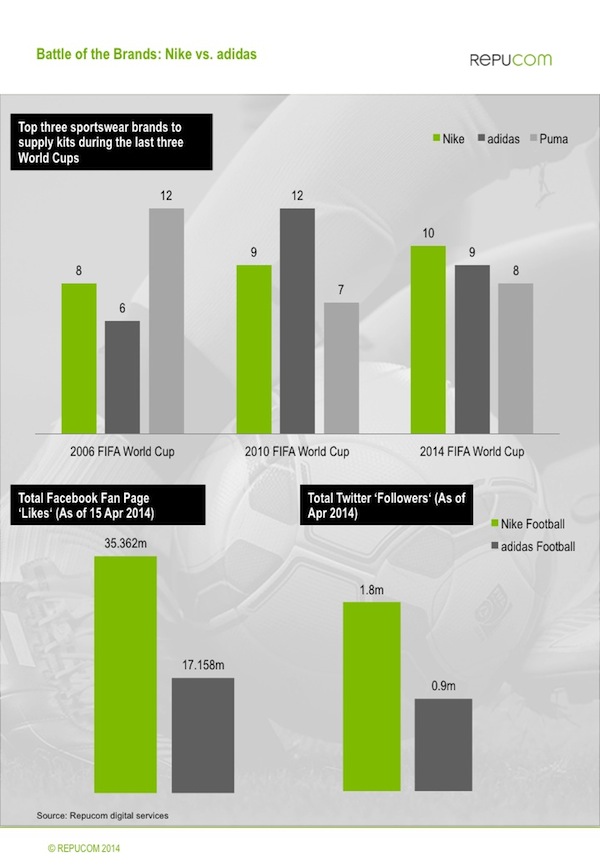