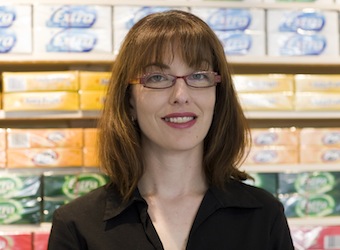 Gum, mint and confectionery company Wrigley Pacific has appointed Tami Cunningham as marketing director to lead the region’s whole of business marketing strategy and further drive growth for the brands in the company’s portfolio.

She joins Wrigley Pacific from Lion’s Australian beer, spirits and wine division where she spent more than seven years in a variety of leadership roles across brand, innovation, and most recently marketing communications as the marketing services director where she worked on the initial development of the innovative Tap King draught beer system. Cunningham has also previously held roles at Pepsico, Suncorp, Foxtel and Walkers.

Andrew Leakey, general manager, Wrigley Pacific, says, “Tami is well known for her passion for developing people, increasing brand distinctiveness and creating value. We look forward to building on her strengths as a highly commercial and collaborative marketing leader.”

Cunningham says, “Part of the world’s fastest growing confectionery company, Mars Incorporated, I have been really impressed by the Wrigley’s award-winning Food Creatures and Eclipse Chewy Mints campaigns, as well as its culture and people practices. I am incredibly excited to be joining the business and the opportunity this role offers to further build the Pacific as a centre of marketing excellence.”

Wrigley Pacific has made a number of high profile hires over the last few months including Pacific sales director, Hamish McLeay, from Campbell-Arnotts.

This has followed the company’s recognition in June as an Aon Hewitt Best Employer. Chosen from 520 companies, Wrigley Pacific was accredited alongside 18 other businesses and was one of only two food and drink companies awarded in 2013 alongside with Frucor.

Tags:
Previous Article
Earned advertising more trusted than ever, but paid media still strong: Nielsen
Next Article
The research autocracy is over – welcome to the democratic model of co-creation