Coca-Cola has found itself in a spot of bother after its new slogan (which features on numerous Billboards and bus shelters in the U.S) inadvertently accuse everyone who looks at it of taking the illegal stimulant ‘party’ drug, coke.

The slogan on the sign, devised by New York agency Droga5, reads, “You’re on. Diet Coke”, however the ‘Diet’ part of the sign appears to be obscured thanks to smaller lettering and raised typography.

The advertisements have caused quite the conversation on Twitter, and is fast becoming a viral joke.

“This advertising is one part of the new campaign for Diet Coke, which is called ‘You’re On.’ It celebrates ambitious young achievers from all walks of life and reminds them that Diet Coke is there to support them in the moments when they are at their best.

“Every single day, young people around the world experience ‘You’re On’ moments big and small. It could be a job interview or a national TV interview, a first date or a final exam, a presentation to your boss or a performance in front of thousands.

“The Diet Coke logo is the centrepiece of the ad campaign. Diet Coke in no way endorses or supports the use of any illegal substance.” 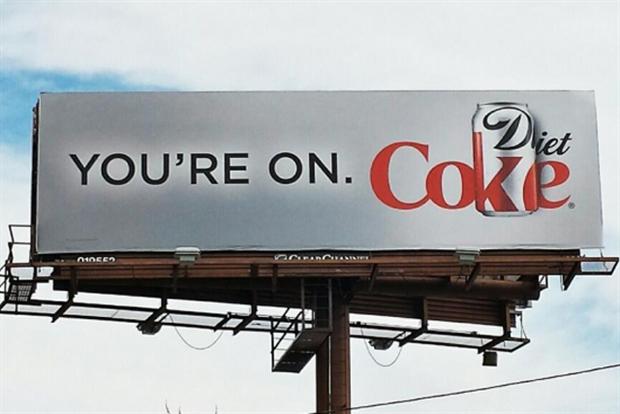