Let’s be honest, an in-flight safety video is not the most exciting thing in the world, and though we know the information being relayed is very important and could well save our lives, the sight of anyone pointing at doors and pretending to blow into whistles can often be a little much for even the most diligent of flight passengers.

This is something Air New Zealand took notice of back in 2009 when it decided to record a handful of its staff demonstrating the safety procedures nude with nothing but artfully applied body paint to conceal their body parts (and dignity) for its ‘Bare Essentials’ inflight video.

The move was inspired by Demi Moore who had just graced the cover of US mag Vanity Fair in nothing but her body painted ‘birthday suit’. 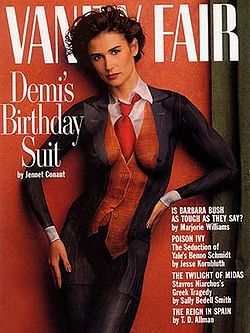 Demi Moore on the August 1991 cover of Vanity Fair

The safety video had mixed reviews at the time, and was refereed to as genius or crass depending on who you spoke to. What’s not debatable is that it became a viral sensation on YouTube that has attracted over seven million views to date.

This was the first offering in what would be a long list of racy and, at times, controversial in-flight safety videos the airline would produce over the next few years. There was the video that featured Hollywood veteran Betty White, another with Bear Grylls, and even Peter jackson’s The Hobbit managed to get in on the air safety message action.

And The Hobbit makes an appearance in ‘An Unexpected Briefing #airnzhobbit’:

Whoever had the idea of turning something as dull (and compulsory) as an inflight safety video and spin it into shareable branded content has certainly received some kind of gold star and a few pats on the back within the Air New Zealand corporate ranks.

“It’s allowed us to showcase our personality and our people, and also our own place,” she says.

“The safety video came up because its something that had never been challenged before and its a very was there a way that we could tell the story a little differently and meet the communication objectives of the campaign.”

Today marks the launch of the airlines latest offering, a four minute video filmed on the coastline of New Zealand’s Cook Islands, featuring bikini-clad Sports Illustrated models (with locals and children peppered throughout) demonstrating the in-flight safety procedures in case of an emergency. The spot also coincides with the 50th anniversary of the magazine.

‘Safety in Paradise’ has only been live for a few hours and has already attracted thousands of  YouTube views.

The reasons behind partnering with a brand like Sports Illustrated, would appear fairly obvious, they are a global brand with world wide, ahem, exposure, who will be projected to provide millions of eyeballs to the Air New Zealand brand.

But is the airline running the risk of trivialising in-flight safety and has there been any push back?

“We haven’t had any push back,” says Williams, “and thats because of the way we have always approached it. Obviously we engage all of our safety team and they in-turn engage the (Civil Aviation Authority) CAA, we have a safety adviser who is with us on every single shoot and works with us throughout the development of the script.

“We get a lot of feedback from our crew and customers and we know categorically that people are engaging and watching (these videos) more and getting those key messages than they otherwise would be.

“First and foremost its about getting that safety message right and making sure it’s clear and that people understand. We believe we’ve absolutely been able to achieve that and at no point would we jeopardise telling that important safety message.”

But with some of the most recognised bikini models from around the world dancing around a beach while attempting to demonstrate in-flight safety procedures, surely there is a risk that passengers will be paying more attention to the girls than the message?

Not so, quips Williams, “I think whats been interesting is that people are making a lot of assumptions because they’ve seen the behind the scenes, but the video features Cook Islanders, Cook Islander dancers, children, as well as the models and I think we’ve managed to strike a really great balance and we were very careful in the way we developed this to make sure that it was tasteful for viewing by passengers of all ages.”

Ultimately, the videos have been (particularly from a marketing point of view) a great success and now play a pivotal role in Air New Zealand’s overall brand message.

“Its just a great piece of engaging content that helps us tell the story about our personality and gives us permission and allows us to get that cut through and in a global market,” says Williams.

“It’s a great way to engage staff as well as customers and with this Sports Illustrated campaign we are working very closely with our market development team to make sure that we can then turn it into a sales effort and actually sell tickets. This is marketing and you think about integration, and you think about all the channels and its about really making that piece of content really work for you.”