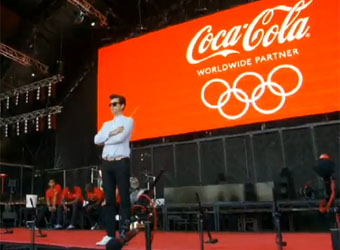 Coca-Cola will create its own TV series to air in 30 countries as part of its global sponsorship of the London 2012 Olympics.

The youth-TV series called ‘Coca-Cola Presents Beat TV’, is the brand’s first foray into ad-funded broadcasting, according to Marketing UK, and will see it follow in the footsteps of McDonald’s who funded a documentary about itself that aired on Channel Seven recently.

Coke will air the series every weeknight during the Games under the moniker ‘Beat TV’, as part of its Olympic ‘Move to the Beat’ global marketing campaign, according to Marketing. For the Move to the Beat campaign, Coca-Cola brought on board English DJ Mark Ronson and pop starlet Katy B to develop a track using sounds from sporting events.

‘Beat TV’ will feature comedy sports challenges and performances from music artists and bands, while a ‘Beat Bus’ will create roaming coverage from the streets of London at attractions and events, playing music from its mobile pop-up studio. It aims to engage young people globally through interviews with sports stars and celebrities.

Coke’s global Olympic marketing director, Claudia Navarro, says the show will capture the vibe of London and the social aspect of the Olympics for fans, rather than what’s happening in the sporting events themselves.

“We’re giving the markets the flexibility of having different lengths [of footage], so they can cut snippets or place it digitally. We want to tap into social media,” Navarro adds.