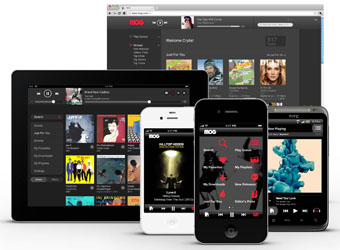 Telstra has launched its music streaming service, MOG, with an almost identical pricing model to leading competitor, Spotify, which launched a month ago.

At $6.99 per month for the PC-based service and $11.99 per month for mobile access to 16 million tracks, MOG’s main point of difference to Spotify is that it does not offer a free, ad-supported option. It is available on a two-week free trial, however the trial requires credit card details and ticks over to a monthly charge if not cancelled, which may prove to be a deterrent to some.

The partnership between MOG and Telstra was announced before Spotify hit the market, in an attempt to alert consumers to the service as an alternative. It is available to users of all ISP or phone providers, but downloads will be unmetered for BigPond users.

Director of digital media and content at Telstra, Adam Good, says Telstra’s research shows that portable digital music players are the number one music listening device in the country, and that many Australians hadn’t bought a CD in the last year.

“Telstra’s research also found that 50% of Australians haven’t bought a CD from a record store in the last year with 75% of people saying it’s due to the cost of CDs or citing constantly changing music taste as the reason,” Good says.

While Spotify boasts a strong brand in the music streaming arena, MOG has received favourable reviews, particularly for its recommended songs feature which is driven by an editorial team (based in the US) which offers up tracks and albums for you to listen to. In the mobile app a slider bar prompts you to ‘stray’ from your usual music library, by offering a sliding scale between songs from the same artist and recommendations for similar artists.