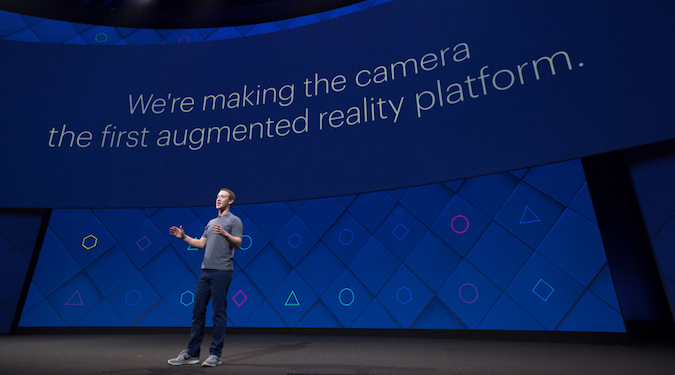 The Facebook F8 event is under way, and many of its ambitions surround in-app camera capabilities and augmented reality, posing threat to Snapchat.

F8, Facebook’s developer conference, is under way in California, and many of the platform’s intentions play in the phone, camera and augmented reality space.

Facebook itself, perhaps a little late to the in-app camera game, following the likes of Snapchat, is playing catch up, but CEO Mark Zuckerberg is confident it will emerge as a leader.

“You may have noticed that we rolled out some cameras across our apps,” he said in his keynote. “That was Act One.”

Where some people might see augmented selfies and think “maybe this is just what kids are into these days… we see a new platform,” he said.

Snap Inc has cause for concern, as it’s clear many of Facebook’s intended developments look to build a similar model into a powerful, popular and innovative platform.

Facebook is opening its cameras from all of its apps to developers, expecting to offer animated selfie masks and AR games. By opening it up to developers and brands, it avoids investing large portions of its own capital into innovating content on the platform, which has been Snapchat’s model of progress.

“Instead of 10 or 20 options to choose from, you’re going to have thousands,” he said. Where Snapchat builds lenses and has a limited amount available, “no one has built a platform yet,” he said.

Facebook is working on three specific use cases for AR:

Zuckerberg hopes these cameras will not just provide fun filters, but a future communication platform. He demonstrated filters that can not only apply effects to one’s face, but interact with one’s environment via 3D mapping and object recognition.

In addition to ambitious plans in AR, Facebook introduced Facebook Spaces, a new VR app at F8. Spaces has launched in beta on Oculus Rift and allows users to hang out in interactive, virtual environments.

Capabilities within the app, allow friends to watch Facebook video content together, draw in the air with colourful markers, call friends in the real world via the Messenger app to invite them in, and use a selfie stick.

In another blow for Snap, Instagram Stories, another Facebook product which is recognised by many as a blatant ripoff of Snapchat stories, this week surpassed all of Snapchat in terms of daily active users. Eight months after the Instagram Stories launch, it has 200 million daily users, representing a jump of 50 million since January.