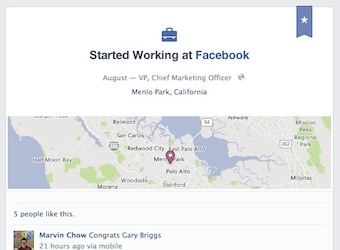 Facebook so far has not been completely marketer-less, of course – since 2010 its marketing efforts have been overseen by vice president of product marketing, Eric Antonow, whom Briggs is officially replacing.

Briggs comes to the social network from Motorola Mobility, where he was chief marketer since being appointed last year amid the leadership overhaul that took place when Google finalised its purchase of the hardware maker.

In a statement, Briggs says of his appointment: “Facebook isn’t just a company. For more than a billion people, it’s their connection to the friends and things they care about most. Telling the story of such an important and still very young brand is an incredible opportunity, and I cannot wait to get started.”