McDonald’s next branded content step? A music video about a burger…

McDonald’s next branded content step? A music video about a burger… 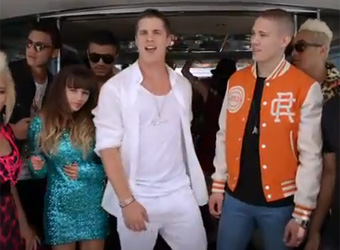 McDonald’s has teamed with the X Factor to create a music video about a burger.

The song, which features lines such as, “I had my eyes on a prize – a Maccas lamb burger and a fries on the side” and, “Aioli? I need it”, uses former X Factor finalist Johnny Ruffo and current contestants to promote the fast food chain’s new lamb burger.

Dubbed ‘Getting Serious’, the execution is the next, and some would say even bolder step in the brand’s foray into branded content, following on from its self-funded McDonald’s Gets Grilled documentary which ran on Channel 7 last year.

A 60-second version of the video ran during a commercial break in Monday night’s X Factor, while the full version is being used online. In the lead up to the song’s launch, McDonald’s also ran a competition to find extras for the video and aired behind-the-scenes footage during the show.

Let us know what you think of the execution – does the tongue-in-cheek approach excuse the fact that it’s a song about a burger?